Watchup for Personalized Newscasts is Now Free on Apple TV 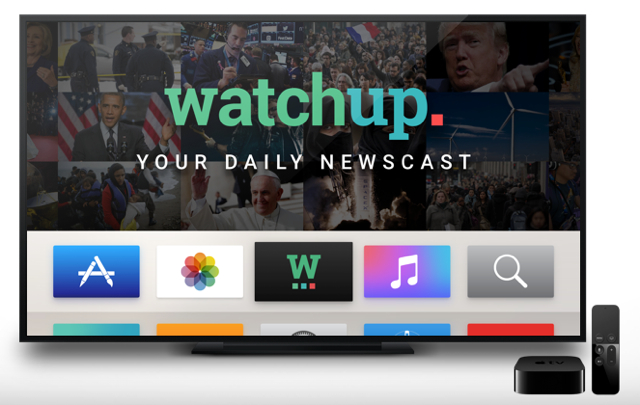 “Personalization is the future of TV news,” said Watchup founder/chief executive Adriano Farano, who notes that Watchup is currently delivering between 2,000 and 3,000 video clips a day. In addition to sourcing traditional news outlets, Watchup also distributes video from millennial favorites The Verge, Vox, CNET and GameSpot. Users can stream news continuously or set up a newscast at a time they designate.

Connected TV devices are crucial to Watchup’s growth, because its average user session on TV apps (28 minutes) is significantly longer than the 5 to 10 minutes on mobile apps. Adding connected TV devices has also quickly paid off; at the start of 2015, 15 percent of Watchup’s viewing was on connected-TV devices, a number that climbed to 55 percent by the end of the year.

“Watching the news is mainly a living-room experience,” said Farano, who describes Watchup’s viewers as “hundreds of thousands” but won’t be more specific.

Advertising is currently pre-roll spots, with Watchup receiving a cut of sales. Farano says that, although Watchup is currently only available in the U.S., he hopes to expand internationally.