Facebook is turning on live streaming video broadcasting to what is potentially a nearly 1 billion-member base. With 934 million customers worldwide, Facebook will offer the live streaming capability first to iPhone users, with a global rollout over the next few weeks. The company has been testing this service with a handful of public figures for the last two months. At the same time, with chief executive Mark Zuckerberg’s strong belief in the future potential of VR, Facebook is making strides in developing a network for it.

The Wall Street Journal notes that “Facebook wants to be a global town hall on par with Twitter,” and that “Facebook is going about it smart from the outset,” by making live streaming easy and approachable to all users. “When a live stream is done, the video goes to the timeline for people to watch on demand at any point down the road,” WSJ explains. 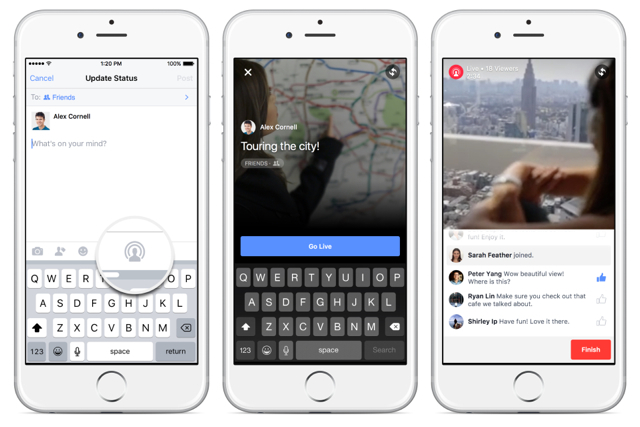 Facebook’s efforts in virtual reality might take longer to come to fruition, but Zuckerberg is busy putting all the pieces into place: he bought Oculus, which makes the Rift VR goggles, and late last year offered “360 video,” which enables the viewer to manipulate the image to see moving action in every direction.

The company has turned to open sourcing before, and that’s exactly what it’s doing with regard to creating an infrastructure that will support VR. Facebook hosted an event for about 300 engineers from Netflix, Yahoo, Akamai and YouTube to talk “about technologies in virtual reality, streaming and artificial intelligence related to video.”

“From our experience, innovation happens faster in the open,” said Facebook vice president of engineering Jay Parikh. “Everything we’re doing in video, live-streaming, 360, all the technology we’re doing in our network, our data centers — that is all heading towards having these experiences in virtual reality.”

Facebook, which is also looking at ways to make its 360 technology cheaper and more accessible, also want to lower the cost of Internet connections, as evidenced by its involvement with the Open Computer Project, a hardware design sharing group that just announced its move into open sourcing telecommunications. AT&T, Verizon and Deutsche Telekom have signed on.

“We’re not interested in being a telecom operator, but in our mission to connect the world we need everyone to come together,” said Facebook executive Jason Taylor, who is also president of the Open Compute Project.