VidAngel, the Utah-based video streaming service that filters out language, nudity and violence from Hollywood movies, launched a new version of its service that it hopes will address concerns about release windows and licensing fees. Disney, Warner Bros. and Fox sued VidAngel for copyright infringement, and in December, U.S. District Judge Andre Birotte issued an injunction against the company, which appealed. While litigation plays out in the 9th Circuit Court, however, VidAngel is back in the game with a new service.

According to The Hollywood Reporter, VidAngel’s new service costs $7.99 per month and “piggybacks on users’ streaming accounts,” as subscribers log into the VidAngel app, link to their other accounts and then filter out whatever they want. 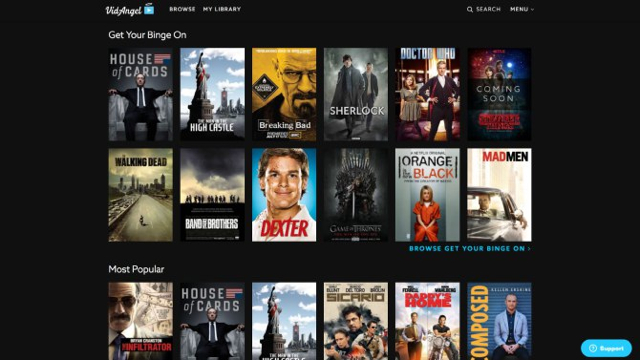 VidAngel chief exec Neal Harmon, who maintains that the earlier service was legal, says that, “out of the gate we’ll be supporting Netflix and Amazon and HBO through Amazon channels,” with Hulu, iTunes and Vudu to follow. “The studios are getting their streaming fees and they’re getting windowing the way that they want it,” he added.

Variety reports that VidAngel claims it “had about a million users at the time it was shut down. The company will now seek to sign up its customers to the new service. In a promotional video, the company compares its service to a parent fast-forwarding to prevent their kids from seeing foul language, violence or sexual material.”

“We don’t force directors to change their scenes,” explains the narrator. “We just let families mute and skip those scenes like they would with a remote. A remote isn’t censorship. It’s choice.”

Next week, VidAngel plans to file a motion asking Birotte “to clarify whether the new technology is subject to the current injunction.” None of the plaintiff’s works (including content from Netflix and Amazon) will be available until the judge rules. Harmon, who claims he reached out to “the streamers,” says “it remains to be seen if the studios will fight” its new platform but hopes they will raise concerns through “conversation instead of litigation.”

VidAngel relies on “an army of content taggers across the country” to flag content they’re already watching. Although VidAngel filters are “faith- and family-driven,” Harmon says they are not just intended for the religious but for anyone, such as sexual assault survivors, who might be triggered by specific content.

With VidAngel’s old system, users paid $20 for a film, filtered a digital copy, watched it and then sold it back for a $19 credit. In oral arguments before the 9th Circuit, Disney attorney Donald Verrilli, “emphasized claims that VidAngel was illegally ripping digital copies of films in violation of the Digital Millennium Copyright Act,” and added that Disney doesn’t oppose filtering, only illegal filtering.

“There’s technology out there … that applies filtering to a licensed stream,” he said. “It connects up with Amazon or Google … who have actually done what they should’ve done and gotten a license for public performance rights.” Clear Play, which lets its customers filter Blu-ray and DVD disks as well as digital films rented or purchased through Google Play (and, soon, some Amazon content), filed an amicus brief in support of the studios.