Twitter is now making its TV Timelines feature available to more users in an attempt to draw in more TV fans, networks and advertisers. TV Timelines, which aggregates TV-related content with a dedicated page for each TV show, is accessed via a separate interface within the Twitter app. When Twitter first debuted TV Timelines, it was only available to a select group of users and for a handful of TV shows. After several months of experimentation, Twitter has tweaked the feature, including adding shortcuts to users’ tweets. 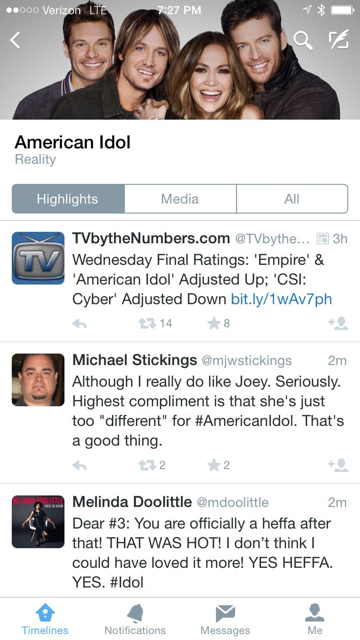 Twitter also added a new discovery feature, aimed at guiding people to TV Timelines, with some tweets about specific TV shows now featuring a direct link to the TV Timelines for that show.

“This seems for now to be restricted to Twitter’s mobile apps, and may also not be available to every user or every show just yet,” says Variety, which notes that Twitter declined to comment on the new feature.

TV Timelines is a more curated experience of what Twitter has done for a long time: try to align itself with TV networks to target audiences with ads via its Amplify platform.

“Giving users a more curated experience to read just about a TV show without the need to follow hashtags or browse through many unrelated tweets could help to convince brands that they’re actually reaching the audience they are looking for, and further grow monetization,” says Variety.

Twitter is also working on a similar effort, code-named Project Lightning, for curated tweets and media for major news events.