Target Ticket: Online Video Service with the Family in Mind

Target launched its online video store to the public yesterday, designed to provide parents with family-friendly options for their children. The Target Ticket online storefront goes beyond the standard age-based ratings of other electronic sell-through services by enabling parents to create subaccounts for their children based on various criteria. Target Ticket currently has 30,000 movies and TV shows (for viewers of all ages) available to purchase or rent, download or stream.

“Target Ticket includes reviews from Common Sense Media, a not-for-profit org that rates movies and television shows,” reports Variety. “Users can create up to 20 profiles, with each one filtered according to age appropriateness, level of violence, profanity, MPAA and TV Parental Guidelines.”

“It’s really best-in-class parental controls, and it was a big ask from our guests,” said Anne Stanchfield, divisional merchandise manager of entertainment for Target. The company says that 43 percent of its customers have children. 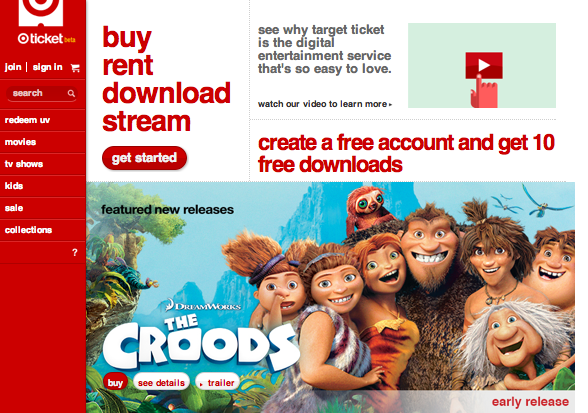 While the video service is aimed at families, content offerings also include adult fare. However, based on its marketing and parental control features, it is most likely to compete with services such as Amazon Instant Video and Walmart’s Vudu.

Target Ticket is available on PCs and Macs, Android and iOS devices, Microsoft Xbox, Roku and Samsung TVs and Blu-ray players. The retailer has deals with leading studios and TV networks.

“In a tie-in with DRM scheme UltraViolet, Target Ticket will be able to store the digital copies of DVDs and Blu-rays that include the option,” adds The Next Web in its review. “The feature is listed as ‘coming soon.'”

“As Target Ticket continues to evolve, the company faces a potential problem: Technology vendor Rovi earlier this month sold the core digital storefront system Target is using to a stealth startup, Reliance Majestic Holdings,” explains Variety. “The Rovi Entertainment Store business (which also powers Best Buy’s CinemaNow) has lost money for at least the last two years, and it isn’t clear how the new owners plan to turn it around.”