The Auto Depth Enhancer “adjusts contrast in specific areas in an effort to impart a deeper, 3D-like feel without out the complication of glasses or any of the drawbacks of conventional 3D processing,” explains Digital Trends.

“Samsung says all of the sets in its UHD line will be powered by the company’s ‘One Connect’ box, which houses the television’s inputs, outputs and ‘brains,’ if you will, inside a set-top box rather than in the TV itself,” notes DT. “This allows the displays to be a little thinner, but more notably, this approach turns the display into a dumb panel, allowing the TV to be upgraded in the future by swapping out the One Connect box.” 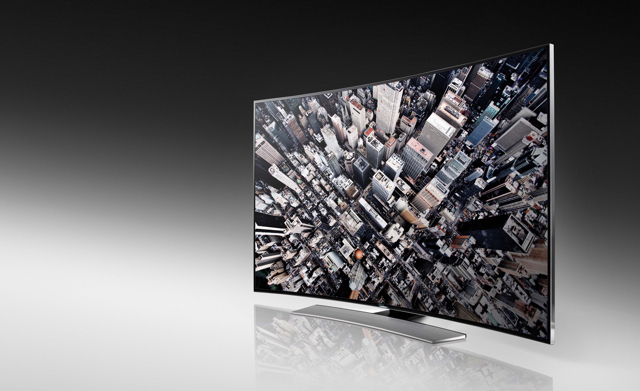 No pricing was offered on the 105-inch curved set that was such a hit at January’s CES, although Samsung said it should be available the second half of this year. The display features a cinematic 21:9 aspect ratio and 11 million pixels.

“It’s important to note that with such a wide screen shape, the normal 16:9 HD content we watch on a daily basis will be displayed with black bars on the right and left sides, though the enhanced width will look fantastic for movies shot in wider formats,” explains DT.

To address the need for more 4K content, Samsung has struck content deals with Fox and Paramount and will offer a UHD Video Pack of movies and documentaries.

“It’ll sell for $299.99 sometime in April, and include movies such as ‘Night at the Museum,’ ‘The Counselor,’ ‘X-Men Origins: Wolverine,’ ‘G.I. Joe: Retaliation’ and ‘World War Z.’ A second UHD Video Pack with more 4K programming is slated for later on this year,” reports The Wall Street Journal. “The TVs also come with Netflix, which will stream in 4K if there’s enough bandwidth (15 megabits per second), where content is available. Netflix’s hit original ‘House of Cards’ is among the first 4K titles.”