After months of anticipation, Oculus finally rolled out its Touch controller — years after PlayStation unveiled its Move controllers in 2010, and even after Vive began shipping two motion controllers. But reviewers who’ve gotten their hands on the Touch are giving it a thumbs-up, saying that its addition now “completes” the promise of the Rift VR headset for a sophisticated and satisfying VR experience. Among Touch’s features is that it tracks the positions of the user’s hand in 3D space.

Wired notes that, because “the buttons and thumbsticks are capacitive … Touch knows if your fingers are on or off certain buttons.” “It’s pretty satisfying to reach out and press a tiny virtual button with an outstretched finger, rather than manipulating your whole hand like a club,” it notes. “The more parts of your body you can fool simultaneously, the closer you get to having wonderful immersive experiences.” 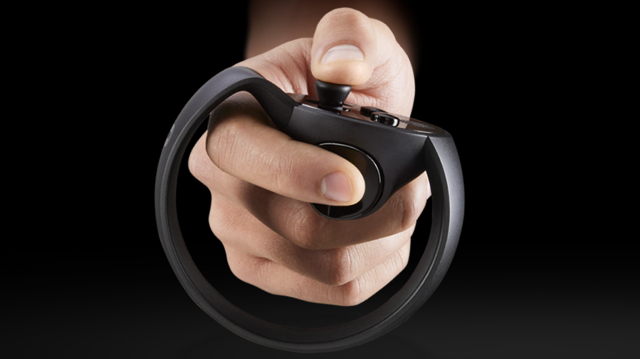 Wired also likes Touch’s form factor, which is “natural” and doesn’t need to be gripped to stay on, with easily reachable buttons and thumbstick.

Setting up Oculus was also “painless,” with each Touch controller taking one AA battery. Non-gamers may find they have “a bit of a learning curve … so it’s not quite as intuitive” as desired but, “ultimately, it’s an important step forward.” Touch may be obsoleted “soon enough,” it concludes, but for now, “this is the most natural and versatile VR control experience available.”

The Wall Street Journal points out that, with Touch, Rift offers some creative, non-gaming capabilities worth a try. “Kingspray Graffiti” lets users virtually paint murals on train cars and brick walls; “Medium” enables creation of floating sculptures; and “Quill” lets the artist stand inside the brush strokes of her drawings. These three apps, all of which require Touch, make Rift “a legitimate creative tool” and “a testament to the technology’s massive potential.”

The Verge says Touch “strikes a great balance between being full-featured and streamlined.” “It doesn’t load you down with inputs, but you’re not left grasping for options that aren’t there,” The Verge adds, recommending it “wholeheartedly” to “anyone with the (considerable) money and the interest.” (To that end, TechCrunch reports that with “the $200 controllers and $79 third camera sensor… the already $599 Rift headset” is “in a distinctively high-end product category.”)

“Oculus Touch doesn’t change the fact that the Rift is a bulky mask with copious wiring, running on a type of computer few people own,” The Verge concludes. “But with Touch, the Rift feels like it’s gone as far as its current technology can manage, and done so with aplomb. It’s not the end goal of virtual reality, but it might well be the end of the beginning.”