For nearly three decades, Universal Display has provided mannequins to fashion retail stores such as Lord & Taylor, Saks and Uniqlo. In an effort to improve the brick-and-mortar shopping experience, Universal Display has developed an innovative way to use modern tech with mannequins to push information to nearby shoppers. Mannequins are tagged with beacons that push messages to customers’ mobile phones complete with photos, sizes and prices of ready to buy clothing inside the store. 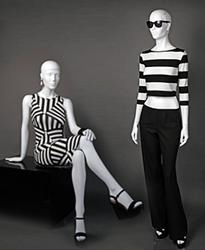 Jonathan Berlin, Universal Display’s managing director, is an expert in the mannequin business, having taken over the family company from his father. Together with his partner Adrian Coe, Berlin pursued the idea of transforming the traditional mannequin to correspond with modern shopping habits. The two created Iconeme, a company solely devoted to the development of electronic beacons that transmit messages to a customer’s mobile phone.

Attached to in-store mannequins, these beacons send out messages to customers walking nearby who can access the information using the company’s app. “Shoppers can see what a store’s mannequins are wearing, who designed the clothes and how much they cost,” reports The New York Times.

Since the U.K. debut of the beacons back in August, Berlin reports that 3,500 people have already downloaded the company’s app. Universal Display’s integration of beacon technology follows that of other stores in London which are also using the technology to push advertisements and promotions to nearby shoppers.

According to Berlin, retailers in the United States are currently testing his tech-equipped mannequins. Despite a struggling retail industry, Berlin explains that the mannequin business has experienced an upward trajectory in sales, up 42 percent from last year.