In an interesting addition to the wearables category at CES this year, Panasonic has introduced a 4K video camera that you strap to the side of your face. The waterproof point-of-view camera, set to launch later this year, has a wire connection to a device that you wear on your arm. The prototype is similar to the $244 HX-A100 HD camcorder that Panasonic debuted at the 2013 CES, but is reportedly more powerful inside and includes 4K recording, a fisheye lens and mini-HDMI port.

“Julie Bauer, president of Panasonic’s consumer electronics division, said the device is waterproof and dust-proof and for the everyday person,” reports ABC News. “Video shot in 4K resolution, which uses about quadruple the pixels found in HD, can be shared via Wi-Fi and viewed on smartphones or Ultra HD living room TVs.” 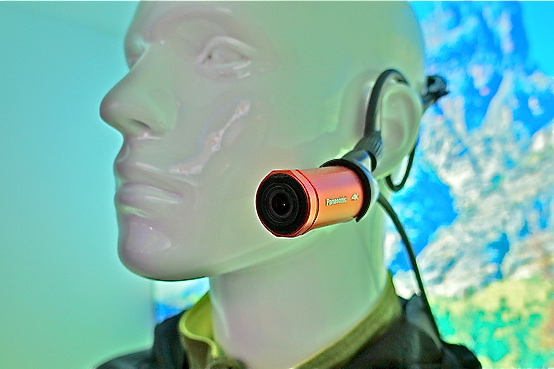 The camera was a highlight of Panasonic’s Monday CES press conference, which introduced a number of Ultra HD innovations, including a digital single lens mirrorless camera compatible with 4K video that is currently in development. 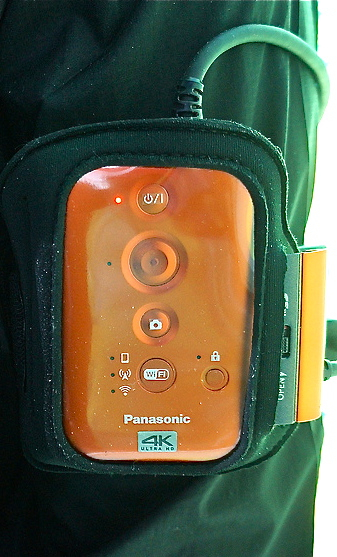 “The company confirmed an April shipping date for the 4K Varicam camcorder, previewed at various trade shows over the past couple of years,” writes Adrian Pennington for The Hollywood Reporter. “It will feature frame rate capture from 24 to 120 fps recording to Ultra HD P2 cards.”

The Viera line “will arrive in 58-inch and 65-inch screen sizes at U.S. stores this year,” notes Adrian. “An 85-inch 4K LED model is also planned; a prototype will be displayed on the show floor. Pricing wasn’t announced.”

“Life+Screen will automatically wake from standby mode when it senses somebody nearby and will display information graphically, such as the time, date and weather — a feature called Info Bar. Working with Panasonic’s cloud service, My Home Cloud, Life+Screen forms a network to share information and content with smartphones and PCs.”