The ONvocal Mix360 Bluetooth headset and phone app allow you to easily balance the volume of your music player, phone, speaking voice, and the ambient noise around you. This is an elegant solution for people who spend a lot of time on the phone while on the go. According to the company, the tech allows Mix360’s “playback to rival the sound quality of a wired connection, and high-performance speakers deliver deep bass, clear vocals, and sparkling highs.” The Mix360, which worked well during its CES demo, sells for $299.

The ONvocal headset is made up of a neck yoke and two earbuds. The earbuds fit tightly into your ear, cutting out much of the noise around you. The left earbud has a microphone attached for speaking on phone calls and for detecting the ambient noise. The yoke contains the unit’s electronics. 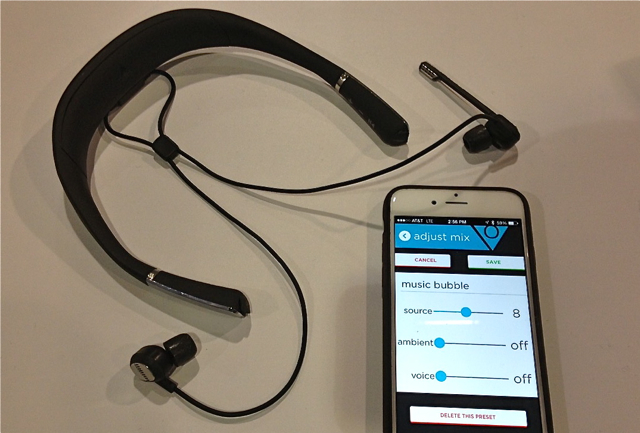 The phone app has three slider controls on one screen for setting volumes: ‘source’ for your music player and phone calls, ‘ambient’ for room noise, and ‘voice’ for the microphone.

Source sets the music player and phone speaker volume. Ambient can cut out all room noise, or allow you to hear flight information in the background while you are speaking on the phone. Voice lets you hear your own voice, so you can hear when you are speaking normally and when you are shouting at the person at the other end of the call because of the loud noises around you.