Visible World, a New York specialist in interactive advertising, is testing a smart TV app that alerts viewers when a certain program is about to air, even if they are doing something else such as playing a video game or streaming a movie. TV networks are finding it more difficult to get the word out about their shows, but this app may help to solve that issue. The app may also prove helpful for TV networks in determining how effective their promotions are to TV viewers.

“For decades, TV outlets have relied on ‘promos’ that offer what are essentially ‘coming attractions’ of new episodes. When viewers are drawn elsewhere, however, the messages are less effective,” explains Variety. “To alert viewers about new programs about to launch in the next few weeks, for instance, CBS is plastering messages on yogurt cups while ABC and NBC are streaming sneak peeks online and via mobile tablets.”

“Gone are the days of being able to graze across TV channels,” said John Collins, managing director of broadcast and interactive television at media agency Media Storm. The company has been involved with Visible World’s testing. “Content discovery, to me, is one of the biggest challenges we all have,” said Collins. 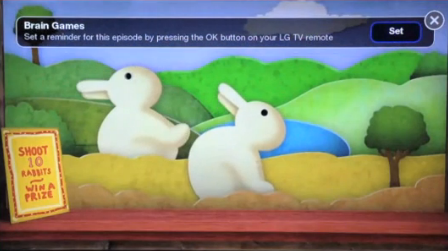 “Already deployed in LG’s LivePlus synchronous interactive TV platform, the Smart TV Program Remind App makes it easy for TV program marketers to display an interactive overlay on their program promotion spots. This overlay asks viewers if they want to set a reminder for an upcoming show and makes it even easier for viewers to, in turn, set the reminder for the promoted show — with just a single click of their TV remote.”

“Development of the app suggests the new, hidden power that may be lurking in the latest iteration of the living-room TV set, which lets consumers toggle from watching something on CBS to playing Xbox to streaming ‘House of Cards,'” reports Variety. “One of the few certain ways of reaching that person and getting promotional messages to them may be harnessing the machine itself, which gives new leverage to manufacturers like LG Electronics and Samsung.”

“The number of connected TV devices sold worldwide will reach 330 million annually by 2017, according to consumer-electronics research firm Parks Associates, almost double the number to be sold in 2013,” notes the article. “In May, Parks found 63 percent of smart TV owners connect the set to the Internet, and 79 percent of these owners use the TV to watch premium online video on a monthly basis.”

The National Geographic Channel has been testing the app in order to ascertain which promos work best in which parts of the country.

Viewers must signal interest while using the app, so it can really be utilized by networks to figure out which promos drive a response. The app can help determine if promos are more effective in a particular region, on a particular network, etc.

“We want to play in all those spaces that have the potential to drive consumers’ decision,” said Courteney Monroe, Nat Geo’s chief marketing officer.