Since last year’s official launch of the re-imagined Myspace in June, its new owners — Tim Vanderhook, Chris Vanderhook, and Justin Timberlake —  have launched iPhone and Android apps while introducing a slew of musical artists to the service. This week, Myspace announced it now has 36 million users, dominated largely by musicians, millennials and artists including photographers and designers. Through Myspace, many are finding a home for music and art discovery and streaming. 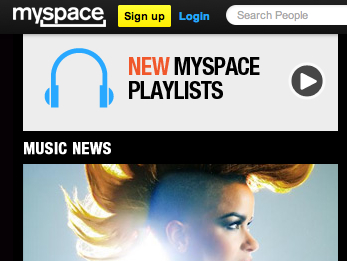 According to Myspace, “70 percent of the Myspace community is 35 or younger… the number of artists on Myspace has increased 340 percent since the relaunch, fueled in part by artists including Pharrell Williams, El-P and Killer Mike (aka Run The Jewels), and CHARLI XCX.”

“It’s impressive growth to be sure, and the momentum is working in Myspace’s favor,” suggests Digital Trends. “If there’s any criticism to be raised, it’s that a network of creators isn’t always sustainable. You need the symbiotic relationship between makers and consumers; Facebook’s success isn’t built on the backs of users who create things and host them there, it’s far more parasitic than that. We, the users, go out and find the things that other people are making and curate them there via Facebook Share or Exchange, or even just manual link-bearing status updates.”

While Myspace is different than Facebook in its focus, there should be concern that the listener demographic is not growing as quickly as the artist community. There’s something to be said about supporting creators, suggests the post, but we are a society of consumers.

Spotify has started introducing social elements into its streaming client. “These two applications arguably have the most in common and compete for users,” notes Digital Trends. “Spotify’s a tough opponent to take on, but Myspace continues to make a case for itself, and its relationships with up-and-coming artists certainly puts Spotify’s to shame.”