Microsoft researchers from the U.K. created a holoportation system, which projects a live 3D hologram of a person into another room, anywhere in the world, where it can interact in real-time with whoever is present. The researchers, who focus on 3D sensors and machine learning, spent two-and-a-half years with the HoloLens team in Washington state to develop holoportation. The system requires a lot of horsepower and high-quality 3D capture cameras, as well as a HoloLens (or other VR/AR headset) on the receiving end.

Wired reports that the impetus for creating holoportation was homesickness. “We have two young children, and there was really this sense of not really being able to communicate as effectively as we would have liked,” said project lead Shahram Izadi. “Tools such as video conferencing, phone calls, are just not engaging enough for young children. It’s just not the same as physically being there.” 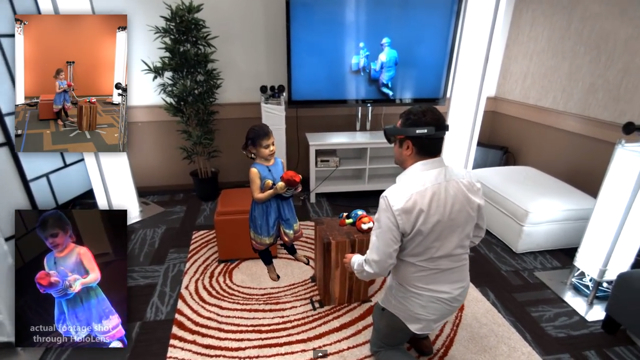 The result, says Wired, “one-ups the classic Star Wars version, in which a recorded message appears in hologram form,” although holoportation can do that, too.

The system works with the 3D-capture cameras placed around a given space with a tight focus on whatever will be eventually transported. “We’re really about capturing high quality detail of the human body, to reconstruct every feature,” said Izadi. “That has required a rethinking of the 3D sensor from the ground up.”

Using Nvidia GPUs, custom software stitches the images together into a single 3D model, with “the accumulated data result[ing] in an incredibly lifelike hologram.” The goal is to process the data in “around 33 milliseconds,” create a temporal model and then stream the data, explained Izadi.

Because “most streaming video codecs aren’t particularly 3D-friendly,” compression is used to crunch gigabytes into megabytes. But, says Wired, “what you’re seeing in this video is real. It actually does work.”

Izadi believes that, “even within a couple of years,” holoportation rigs may be installed in meeting rooms, offsetting the trillion dollars a year spent on business travel. Although Izadi and his team worked closely with HoloLens, the system is actually hardware-agnostic. All that’s really required at the receiving end is a VR or AR headset.

“Obviously we feel like there are some unique scenarios with HoloLens, but we would like to leverage as many display technologies as possible,” said Izadi.

Check out the video demo on the Microsoft research site.