Jenna Mourey, better known as Jenna Marbles, has reached over one billion views on her YouTube channel. The 26-year-old digital entertainer has developed an impressive following of fans (especially teenage girls) with her collection of five to eight minute videos. As she rants, performs impressions, creates parodies and pokes fun at celebrities, she may also end up becoming a pioneer of a new genre of online entertainment. 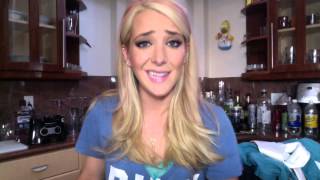 “She has more Facebook fans than Jennifer Lawrence, more Twitter followers than Fox News and more Instagram friends than Oprah,” reports The New York Times. “Her weekly videos on topics as quotidian as ‘What Girls Do in the Bathroom in the Morning,’ ‘My Favorite Dance Moves’ and ‘I Hate Being a Grown Up,’ place her in an elite club of more than one billion YouTube views, with more than eight million subscribers and growing.”

She typically performs, records, edits and uploads her own videos, which continue to grow in popularity, especially with a younger audience that spends more time on YouTube than TV. Her “Drunk Makeup Tutorial” has been viewed more than 15.1 million times. One of her first videos, “How To Trick People Into Thinking You’re Good Looking,” quickly went viral and has since been viewed nearly 51 million times.

“Her videos are a highly shareable cocktail of comedy, sex appeal, puppies and social commentary, laced with profanity,” notes the article. “She skillfully juggles Facebook, Twitter, Instagram and YouTube to build a deeply loyal connection with fans who find her eminently easy to relate to.”

She is part of a growing number of 20-something YouTube stars that are creating “a new entertainment genre, complete with its own rules and visual vocabulary,” suggests NYT. Many of them are no longer one-hit wonders, but are developing loyal followers.

“Now we have this whole industry, with networks, managers, P.R. and award shows,” explains Alan Van, executive editor of online media blog NewMediaRockstars.com. “We have this whole system dedicated to making more money and sustaining success, so these personalities are more likely to succeed longer than they could have before.”

However, even though Mourey has become an Internet sensation and a role model for teenage girls, she has her detractors. She recently received criticism for videos that talk about women sleeping with multiple partners and for impersonating singer Nikki Manaj in an inappropriate manner. Since girls as young as nine have been watching her videos, Mourey has also been criticized for her excessive swearing.

Regardless, industry experts estimate that Mourey could earn six figures from advertising revenues through the YouTube Partner Program. “TubeMogul, a video ad-buying platform in California, examined traffic on the Jenna Marbles channel and estimated that she could have earned as much as $346,827.12 in 2012,” writes NYT.