Best practices for remaining on budget, the importance of planning and testing, whether to capture in mono or stereoscopic 3D, techniques for directing talent, and how to treat (or not to treat) VR environments were among the many topics discussed during a compelling panel about creating 360-degree video at the Oculus Connect 3 conference in San Jose last week. Four accomplished virtual reality production executives and technologists shared their practical knowledge and recommendations for navigating the uncharted waters of budgeting and producing VR content.

Ola Bjorling, global director of VR advertising production company MediaMonks, described his strategy for managing the uncertainties of live action filmmaking in 360. He creates a spreadsheet that details all the known components and all the risk factors associated with the equipment, the technical demands and the creative process. This document lays out everything from lenses, rigs and audio engine, to experience shooting at projected light levels, at the targeted frame rates and using the planned recording technique. 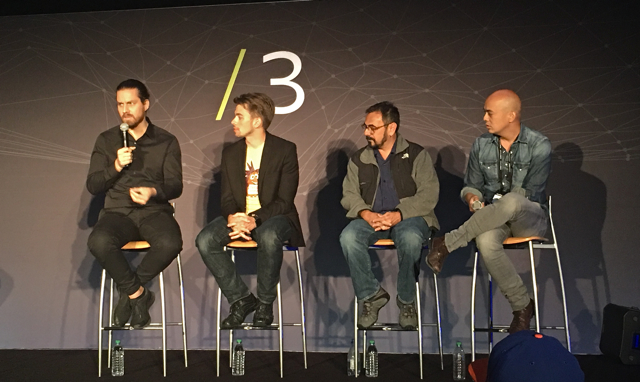 The panelists agreed on the importance of testing to preview the storytelling, shot design and edits as well as to win the confidence of clients. Bjorling suggested shooting rough footage with a Ricoh Theta, a simple, 360-degree video consumer camera. While Joseph Chen, executive technical producer at VR production companies Here Be Dragons and Within (formerly Vrse), described previsualizing concepts in Maya on a Unity platform.

Maxwell Planck, engineering lead at Oculus Story Studio, emphasized the importance of creating an animatic and viewing it in VR “to see how things look, while they still can be fixed.”

The speakers were also of one mind when it came to the difficulty of shooting omni-directional stereo footage. The alternative, according to Bjorling, is to shoot native stereo on one direction and convert the remaining camera views in post-production. Intermixing stereo and mono scenes is another option if done right, added Chen, but if the content is destined for 6K streaming on a head mounted display, stereo is imperative.

“Acting for VR is very different,” asserted Chen. “Sometimes actors have to do more and sometimes they have to do less.” A useful technique is to provide talent with immediate playback on an HMD so they can critique and modulate their performance.

For several of the panelists, VR environments are also characters. “The temptation is to fill the frame,” said Chen, and while sometimes the content demands it, “you can also end up with a cluttered mess. Cacophony is not immersion,” he warned.

But while directors like to view footage in VR to evaluate the take and its emotional impact, HMDs on the set “can become a crutch,” continued Chen. Some of our best shots to date were serendipitous. “We just previsualized, set it up, and hoped for the best.”