Award-winning filmmakers and video reporters Nonny de la Peña, Sandy Smolan and Ben Solomon, along with ABC News Digital executive Dan Silver, took part in a wide-ranging discussion about immersive journalism at the 2016 Sundance Film Festival this past week. Among the ideas expressed were the importance of choosing the right stories for the virtual reality medium, of telling them with filmic finesse to maintain audience interest, and of designing the role of the on-screen reporter. Noted as on the near horizon for immersive reportage were real-time streaming, interactivity, and live action capture with the aid of videogrammetry.

Silver, who launched ABC’s News VR series, described virtual reality as the crown jewel of the “evolving, modern newsroom,” but stressed that journalists must examine their goals before choosing VR as their medium. ABC recently debuted 360-degree immersive news content about North Korean’s military buildup (filmed surreptitiously) and about Syria’s efforts to save antiquities from destruction by ISIS.

Solomon, a Pulitzer Prize-winner, advised that VR stories must be captivating, important and visually told. He described seeing lots of VR for VR’s sake. “The novelty will quickly wear off,” he warned. “You won’t be able to get away with that soon.” 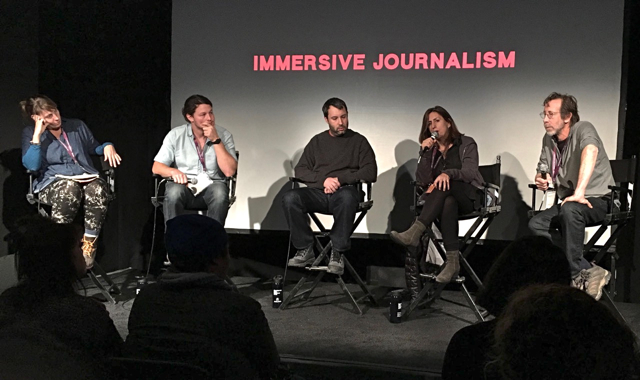 Solomon collaborated with VR production company Vrse.works on an immersive documentary about famine in Sudan refugee camps. He believes that VR also has a role in relaying time-sensitive narratives. The New York Times shot and posted, in five days, a short 360-degree piece about the aftermath of the recent Paris terrorist attacks. And, just a few days ago, the publication garnered 1.2 million views for a VR video of the historic 2016 East Coast blizzard, recorded with Ricoh’s 360-degree Theta consumer camera.

ABC News is interested in immediacy as well. Silver said that the network is considering offering live VR streaming when it is available, citing Nokia’s work on an autostream solution with real-time stitching.

Additional innovations cited as on the horizon for VR journalism were videogrammetry and interactivity, which Yale Poynter Fellow de la Peña described as the key to lengthier and repeated engagement with VR content. De la Peña said she is looking forward to the time when videogrammetry breaks the bounds of blue screen so she can record depth information in the field.

Solomon added that NYT would consider producing interactive stories, and that the only impediment right now is the technology. He reiterated, as he did frequently, that the medium must fit the story.

For Silver, some of the important creative questions revolved around the role of the reporter: “Should the reporter stand in front of the action? Should they guide the audience through the narrative?”

Silver talked about the “rebellious viewer,” a term coined by Google VR filmmaker, Jessica Brillhart. “It’s the viewer who turns away from the action to look at the space around them. We consider them (at The New York Times) when we create content,” he said. “We want you to be rebellious… Why do 360 if you want someone to stare at a reporter?”