At the HPA Tech Retreat, RealD senior scientist Tony Davis and cinematographer Bill Bennett, ASC shot and mastered imagery in a variety of high frame rates. One of the chief challenges, said Bennett, is achieving a result with a cinematic aesthetic. “As we move towards HDR displays, we’ve discovered that high contrast images tend to judder as they move across the screen,” said Bennett. The two proposed a solution whereby images are acquired at a very high frame rate, but then adjusted in post.

RealD’s TrueMotion is software that creates a synthetic shutter that adjusts motion blur, sharpness and judder to create a more real look and/or allow the creation of another look. The cinematographer acquires with a 360-degree shutter at 120 fps or more, then in post can adjust the shutter to create the desired look. 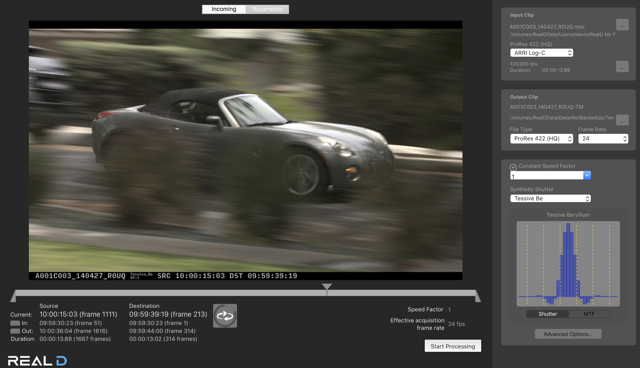 Frame integration, said Bennett, “allows you to have the best of both worlds.” “You can capture at high frame rate but then go down to a cinematic frame rate,” he added. “You can solve flicker problems in post in this way. The key thing is that I don’t have to make these decisions in photography. The creative aspect is done in post.”

Bennett recounted watching “The Hobbit” in 48fps and “Billy Lynn’s Long Halftime Walk,” which was shot at 120 fps. “It’s not cinematic in my opinion,” he said. “I’d pay money to see the World Cup or Super Bowl in those formats, but in a movie, the closer the images are to being real, the harder it is to imagine yourself in the story.”

He recounted a shoot where the director wanted Olympic athlete Mikaela Shiffrin to bicycle through a forest, with a close-up shot of her face. Bennett shot her riding an exercise cycle in the bed of a truck, with a light shining in her face and someone waving a leafy branch over the light. “We could render this in many frame rates and shutter angles in post to produce something the director liked,” explained Bennett.

Davis showed test footage shot at RealD by Bennett. In one, a woman is sprayed with water from a hose; in post, they used TrueMotion to control the motion blur of the spray. In another, they showed the wagon wheel effect of an airplane propeller and how they, by shooting high frame rate and going down to 24 fps, made the rotor look like it is supposed to.

“You may want the wagon wheel effect, but this is a mathematical test to show we are doing what we say we can do,” said Davis.

Using windows, a single image can be segmented for separate corrections. “We can do beautiful speed ramps with consistent shutter and then window between crisp and smooth,” said Davis. “This is a pretty powerful creative tool to have two motion sets in a scene,” agreed Bennett.