Facebook just introduced a new way to view panoramas and VR photos on smartphones. Rather than zooming in and out, the new feature, dubbed 360 Photos, will allow the user to simply upload a panorama or photo from an iPhone, Samsung Galaxy, 360 app or the Ricoh Theta camera and its ilk, which Facebook will then convert. Via a compass icon, the user can then scan the photo by tilting the phone or click/tap-and-dragging. A Gear VR user can tap the “View in VR” button to scan the 360 photo by moving his head.

TechCrunch reports that some of the 360-degree content users can check out includes the International Space Station with NASA, a Paul McCartney concert, and behind-the-scenes at the Supreme Court with The New York Times. 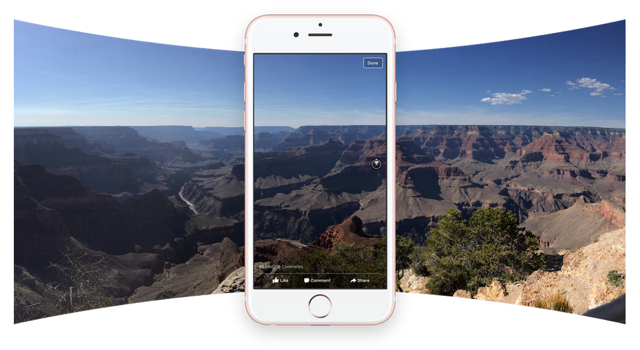 Facebook, which has celebrities and publishers ready to share 360 photos, introduced photographs to its social platform more than a decade ago, says product manager Andy Huang. “They quickly became one of the main ways that people share their experiences with their friends and the world,” he said.

Facebook has expanded its focus beyond photos to include video, 360, and VR, all of which might encourage users to make daily visits to the site. More importantly, 360 video is also “a novel opportunity for brands to create eye-catching marketing,” and 360 ads for everything from movie sets to tourist destinations are likely to make an appearance.

With one million monthly users, Samsung Gear VR has a big reach. As 360 and VR becomes more popular, a lack of professionally-sourced content is becoming problematic. Facebook’s 360 Surround camera and open source designs has opened the door to ambitious content creators with $30,000 to build a “top-of-the-line VR capture device.”

User-generated VR videos could help build the sector, and “Facebook’s history as place to upload user generated content could help it win this frontier of social media.”