The Wall Street Journal notes that, with recent market-share losses, Lenovo hopes the “new models will stand out in a crowded field of products that look and work largely the same.”

“We don’t think that is good enough anymore,” said Lenovo chief executive Yang Yuanqing, who adds that the new phones “have created a new era for the smartphone and Lenovo.”

Underscoring its intent to innovate, Lenovo also showed prototypes of a smartphone flexible enough to wrap around a user’s wrist to be a smart watch and a tablet whose display could be folded in half to use as a phone. No details were released as to when the prototypes would become products. 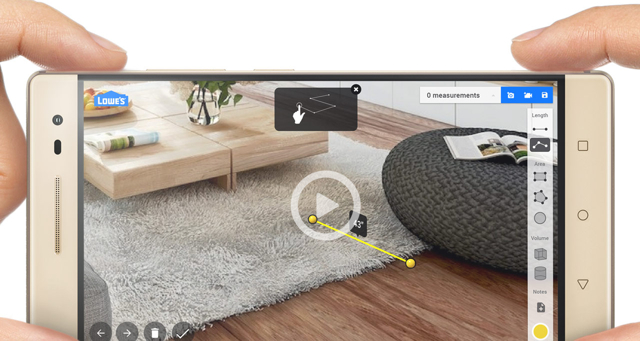 Made public in early 2014, Google’s Tango project uses “arrays of cameras, sensors and software to create three-dimensional models of indoor spaces and track the user’s motions through them.” The technology can be the foundation of various augmented reality experiences. Besides Lenovo, another early partner is home improvement store Lowe’s, which now offers a Tango-based app to allow users see how appliances, counter tops and other products would look in a room.

Lenovo’s Phab 2 Pro (pictured above), outfitted with four cameras, including one to perceive depth and motion-tracking technology, will be available in September for $499 on an unlocked basis without carrier subsidies.

The Verge describes Lenovo’s Moto Z phone’s modular capabilities, including the Android handset’s 70-inch projector and 22-hour battery pack, both of which will be available when the phone launches in the U.S. this summer as a Verizon exclusive. Developers, who will be offered a reference kit for designing custom modules, also known as mods, are also at work.

At Lenovo Tech World in San Francisco, the company and Motorola showed off two prototype mods: an LED-lit backplate that responds to sound and a circular display that mirrors whatever is on the smartphone’s screen or allows the user to take selfies with the rear-facing camera by displaying the viewfinder.

Related:
Motorola Moto Z Hands-On: A Snappy Take on Modular Smartphones, The Wall Street Journal, 6/11/16
The First Phone with Google Tango is a 6.4-inch Monster from Lenovo, The Verge, 6/9/16