Fresh from last year’s win for “Paperman,” Disney is nominated for an Academy Award in the Animated Short Film category. Animators for “Get A Horse!,” which is partly done in a 1920s style, drew inspiration from early Disney holiday cards. The animation blends computer-generated imagery with traditional hand-drawn work, and the story involves Mickey Mouse on a mission to save Minnie Mouse from her lascivious kidnapper Peg-Leg Pete. A win for Disney would mark a first for an animated short starring Mickey.

“The return of Mickey Mouse to the big screen comes after 18 years — ‘Runaway Brain’ of 1995 was nominated but didn’t win an Oscar,” reports The Wall Street Journal. “In ‘Get a Horse!,’ director Lauren MacMullan wanted to return to the original 1920s-era Mickey Mouse — not just in simple black-and-white, but in spirit.” 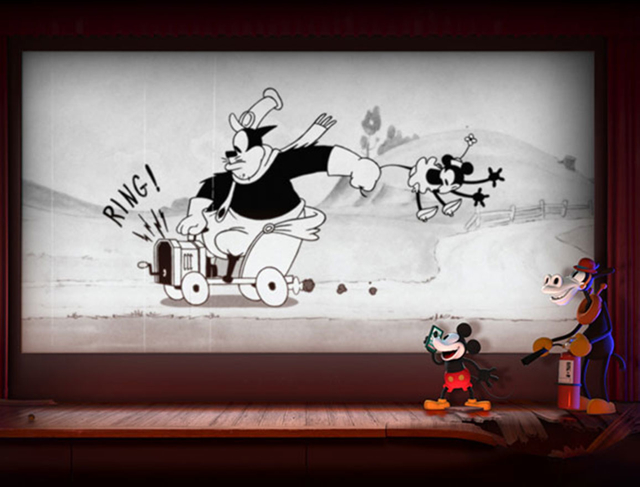 TV veteran MacMullan worked with a team of 14 animators on the short, which played in front of “Frozen” (also nominated for an Oscar). “She envisioned ‘Get a Horse!’ as Disney’s fifth short of 1928, after the pioneering ‘Steamboat Willie’ and before ‘The Barn Dance,'” notes the article.

“Perhaps the most special touch of all, and one likely to get the attention of the Academy’s many older voters, is the film’s use of original voice recordings by Walt Disney himself for every line of dialogue by Mickey Mouse,” according to WSJ.

The article includes a behind-the-scenes video, several images from the production, and a slideshow of early Disney holiday cards. The Disney site for the short also includes related media (including the image above).

From the Academy Awards site, the nominees for Animated Short Film include: