The Wall Street Journal says the deal got its start when Comcast chief executive Brian Roberts and cable division president Neil Smit met with Amazon chief executive Jeff Bezos to talk about ways of working together. Selling Comcast products on Amazon was one idea that rose to the surface and the two companies figured out the simplest way to do that over the months that followed. 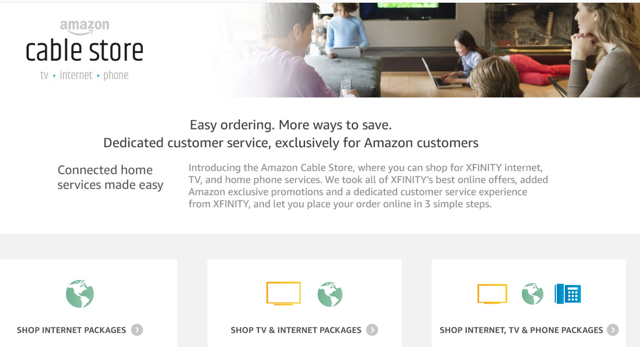 “They helped us in our thinking about how to simplify the experience and just make it clean,” said Smit, who notes that people shopping on Amazon for a TV set will be able to get Comcast services at the same time. “We’re partnering with a company that’s so good at the customer experience — I think that’s really what excites me.”

According to Smit, Comcast could sell other products on Amazon in the future, such as its home security service.

Pricing for its bundles on Amazon will be the same as on its own website, says Comcast. An unnamed source says that Amazon will take a fee when a customer signs up for a Comcast subscription, although no amount or percentage was named. The Amazon site states that people can cancel Comcast subscriptions within 30 days or “select a no-term contract to downgrade or disconnect whenever they wish.”

Comcast, which plans to remodel its brick-and-mortar stores to encourage customers to play with the products to “give them an Apple-feel,” says the new call centers have the goal of answering calls in 60 seconds or less, with no waiting.

Amazon is also in discussions with Charter Communications about a retail partnership, although a Charter spokesman says no final decisions have been made and, reports WSJ, “an Amazon spokeswoman declined to elaborate on other potential partnerships with cable companies.”