Virtual reality startup Nomadic is integrating real-world physical objects, such as a flashlight, into its VR experiences. Among the other physical objects are leaky pipes that let off real hot air, a file cabinet that has to be opened to retrieve a real gun replica, and a virtual door with a real doorknob. The idea, according to Nomadic chief executive Doug Griffin, is that such real objects can add a feeling of magic to virtual reality. The company demonstrates these capabilities with an Oculus Rift VR headset.

According to Variety, the San Rafael, California-based company accomplishes this “without the need for any additional wires.” The reporter describes walking a wooden plank, to cross from one rooftop to another, “avoiding a steep and scary drop into a back-alley, and which actually wobbled under my admittedly shaky feet.” 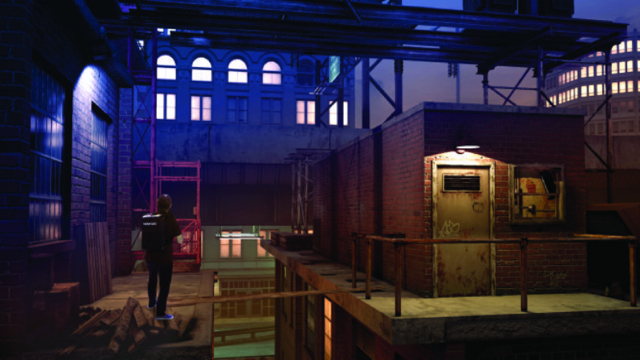 “I’ve done it 40 times, and I still get that feeling in the stomach,” said Nomadic’s head of growth Kalon Gutierrez.

Other companies have introduced physical cues to VR, but Nomadic has no plans to go out on its own with VR experiences. Instead, the company hopes to partner with established VR production companies and traditional content creators as well as “bigger players” such as malls and theater chains that already have the real estate and “are now looking for the next big thing to retain and monetize audiences.”

To that end, Nomadic will build modular sets that are easily and quickly reconfigurable so that a partner can run an experience for a few months and then download the next one, with instructions on how to arrange the set’s physical cues. The use of “modular, marked ground tiles are supposed to make set changes as easy as building a Lego model.”

“Everything we are doing is built for scale,” said Griffin.

The company has built a five-minute proof of concept designed for one player, but plans to “enable social VR experiences with multiple players, with each lasting around 15 minutes.” The experiences will not all appeal to gamers, but will also aim to be “family-friendly experiences,” with the idea that malls or theaters could operate more than one VR experience, attracting different audiences.

Nomadic will exhibit its tactile VR this week at CinemaCon in Las Vegas.