With the rise of new headsets promising unique augmented and virtual reality experiences, many are anxiously awaiting the first killer product, while others are wondering how we will produce the compelling content — movies, games and other experiences — that will make the technology worthwhile to the public. ARKAMYS is a company that specializes in automotive audio, but at CES this year it is demonstrating how its tech can be used to create a 360-degree experience in which the user steps inside another’s perspective.

ARKAMYS has teamed with Kolor, a company that uses video-stitching software to create a 360-degree video file from multiple camera sources.

“Kolor’s technology adapts the video to your movements whereas ARKAMYS masters the 360-degree sound,” explains the press release. “This ARKAMYS 3D sound technology allows the virtual positioning of moving or fixed sounds around you. It convinces your brain into thinking that the sounds come from the right, the left, front, rear. You are in the heart of the action.” 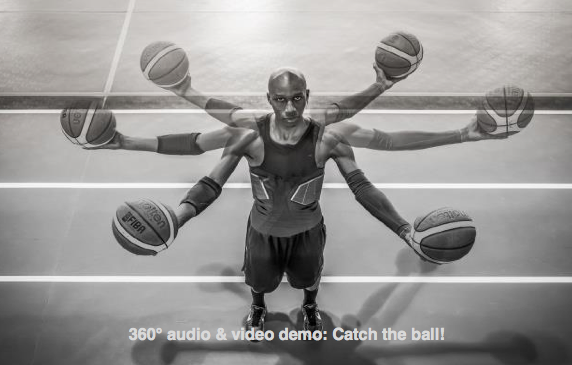 Ben Popper, writing for The Verge, checked out a demo of the immersive prototype experience during CES Unveiled. An ARKAMYS product manager described the company’s vision for the future of television and gaming, in which consumers step inside the environment they are watching and become the featured actor or athlete.

“ARKAMYS strapped me into an Oculus Rift and headphones,” writes Popper. “I was on a court, playing some one-on-one basketball. The sound and video were incredibly well-synced with my position. If the player was behind me, then moved to my side, and I turned my head to track him, or turned the other way away from him, the sound of the ball bouncing off the hardwood moved in a way that felt perfectly natural and viscerally real.”

While the ARKAMYS rep admitted that VR could easily become the next 3D TV and disappear as soon as it showed up, he suggested that the resources being pumped into headsets by the likes of Google, Facebook and Samsung inspires the need to create compelling content for the user experience. But it’s going to take some imagination.

“VR is a major new medium on the scale of photography and film. At first, people will try porting things over from other platforms like game consoles. But the best content will be created for specifically for VR,” says Chris Dixon, an investor who backed Oculus Rift. “In the early days of film people had to learn a new visual grammar — close ups, establishing shots, etc. It will be the same for VR. We’ll also need new tools for creating VR content. Game programming tools will be useful in some contexts but we’ll also need new tools.”

ARKAMYS — with its eclectic, imaginative background (see videos for “imagination room” and “holophonic ball experiment“) — may be one of the companies that helps write a new language.