Amazon announced yesterday that it plans to make Prime Instant Video available to all Android phones in the U.S., U.K. and Germany. An update to the Amazon app for Android will enable users to stream movies and TV shows available through Prime Instant Video. However, users will first need to install or update the Amazon app, and then use in-app tools to install the Amazon Instant Video player app. Users will also need to enable a phone setting that allows installing of apps from outside the Google Play store. 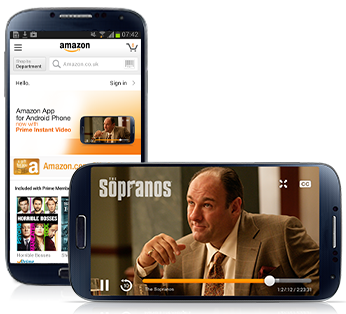 Version 5.0 of Amazon’s app in the Play Store allows users to access Amazon’s entire digital catalog (including 30 million songs and two million Kindle books) and the ability to shop for apps from Amazon’s Appstore. According to the press release, the update also comes with 5GB of free photo back-up space via its Cloud Drive service.

“The company has been making a big effort to increase its online video catalog over the years, and has now grown to over 200,000 movies and TV shows available to rent or buy, in addition to the tens of thousands of streaming titles,” reports TechCrunch.

“Some of the more notable streaming titles include the newly acquired HBO shows like ‘The Sopranos,’ ‘True Blood,’ ‘Boardwalk Empire,’ ‘Six Feet Under’ and ‘The Wire.’ Meanwhile, the service also includes access to Amazon’s original fare, like ‘Alpha House,’ ‘Tumble Leaf,’ ‘Creative Galaxy’ and ‘Annedroids.’”

Prior to the app update, Amazon Instant Video was available for iOS devices, Amazon’s Kindle Fire, and other Android tablets.