Amazon added restaurant chain TGI Fridays to Amazon Pay Places, the tech giant’s new payments feature for its mobile app that allows people to make purchases in stores and restaurants. Amazon Pay Places is available for pick-up orders at a limited number of TGI Fridays restaurants on the East Coast, but will expand to additional locations. Amazon isn’t alone in pursuing digital payment features; Apple, PayPal, Samsung and others are also focused on such services for online and in-store purchases. 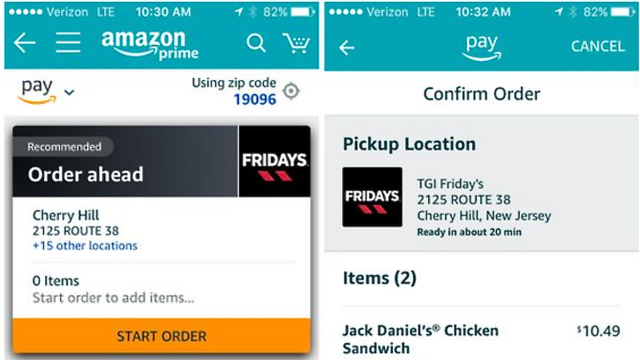 Amazon is promoting the new feature as being convenient for users. Details of the partnership with TGI Fridays have not been released.

TechCrunch states that, “Amazon’s intentions are to take Amazon Pay Places beyond restaurants.” One logical application would be to use the app for customer pick-up orders at Whole Foods. Unlike Amazon Restaurants, Amazon Pay Places is “a new addition to Amazon Pay,” which lets merchants “add a button on their websites’ checkout pages that let shoppers pay via their Amazon account info.” Like PayPal, “Amazon Pay charges 2.9 percent + $0.30 per transaction.”

In February, Amazon revealed that, “over 33 million customers have used Amazon Payments to make a purchase to date — a figure that was up 10 million from the 23 million it had in April 2016.”