Google is introducing a new look for its search product that will appear just beneath its search box. The user will find a feed of news, entertainment and other content customized to her searches, video views and other personal information, including her location, email and digital calendars. Available first for the desktop, the new Google search page will eventually be available for mobile web browsers as well. Since Google launched in 1998, it has kept its landing page simple, only tweaking it in minor ways.

Bloomberg notes that the change is “an acknowledgment that Facebook’s News Feed has become one of the most addictive ways to consume digital information on smartphones,” and adds that LinkedIn, Amazon Spark and others have “come to similar conclusions.” 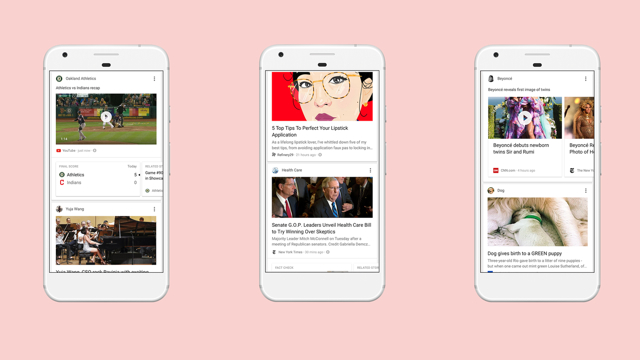 But the new feed will “get a lot more exposure because it will stream on the launch page of Google’s namesake mobile app on Android and Apple mobile devices.” By creating this feed, Google will attempt to remedy what others have seen as “one of the few weak points in Google’s business.”

According to Google search executive Ben Gomes, “the new feed won’t include paid content at the onset, but he didn’t rule that out in the future.”

TechCrunch reports that, “for now, the new and improved feed will live inside the Google app on Android and iOS (as well as in the Pixel Launcher), but soon mobile and desktop web users will begin seeing elements of the news feed on the home page.” Users will “be able to follow topics like movies, sports teams, bands and more,” as well as “unfollow topics to refine what they see.”

The feed will also “highlight multiple news sources and fact checks that throw the veracity of information into the forefront of a user’s mind.”

For more information, visit Thakur’s post on the Google blog.