Sales of virtual reality headsets and software are predicted to reach $1 billion this year, and advertisers are paying attention. At this week’s Cannes Lions International Festival of Creativity, an annual confab for advertisers and agencies, the focus will be on VR. Google executives will talk about the virtual reality platform based on the Android mobile operating system that the company plans to introduce this year, and ad agencies will describe how they’re using VR to promote brands and products.

Bloomberg quotes ad agency Tribal Worldwide creative director Victoria Buchanan as saying that, “people don’t believe and trust in broadcast ads like we used to.” “People want to try before they buy or feel before they touch,” she explains. “This is going to be vital in getting people engaged.’’

Among the VR advertising initiatives, BMW and Volvo have created apps to let users simulate driving their cars and IKEA has a program to build a virtual kitchen. Google Cardboard, because it is a low-cost VR viewer, has generated a wide variety of promotions, including those by Coca-Cola and McDonald’s, which have offered VR goggles from, respectively, soda-can packaging and Happy Meal boxes. 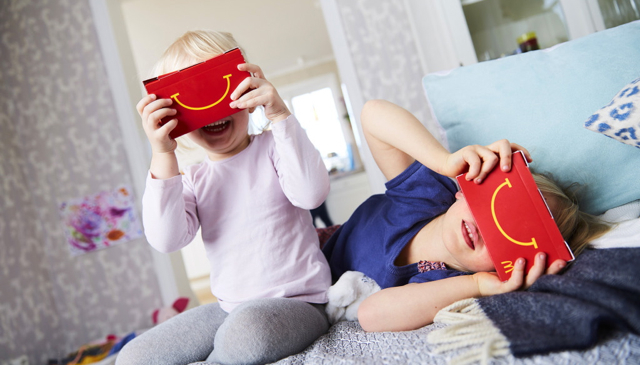 Brands including Gatorade, Mini USA and Nike have also posted films on Google’s YouTube channel for 360-degree video clips. “We’ve been working with brands on how to create access points to virtual reality via Cardboard,’’ says Google executive Debbie Weinstein. “We’re encouraging people to start with the 360 video or a GoPro camera.”

Bloomberg agrees, saying “virtual reality remains a fringe advertising technique,” due to the cost of the headsets and production, as well as the experience itself, which “can also leave some feeling isolated, rather than connected.” Publicis U.K. head of digital strategy Sol Ghafoor believes that, “once physical barriers are overcome you will see it become mainstream, beyond games.’’