ABC to Broadcast Sitcom Episode Shot on iPhones and iPads

On February 25, ABC will air an episode of “Modern Family” called “Connection Lost” that addresses how parents attempt to communicate with their disinterested children via technology. The production marks a first in that it was shot almost exclusively on mobile devices, including Apple’s iPhone 6 and iPad Air 2. During the episode, the TV screen will often resemble character Claire Dunphy’s MacBook screen featuring a mock-up of Apple’s OS X Yosemite (the show was produced in October when Yosemite was still in beta).

Dunphy (played by Julie Bowen) is stuck in an airport while struggling to locate her daughter Haley (played by Sarah Hyland). As Haley ignores her mother, other members of the family become involved with the drama as the production introduces text messages, emails, Facebook, and FaceTime video chats. 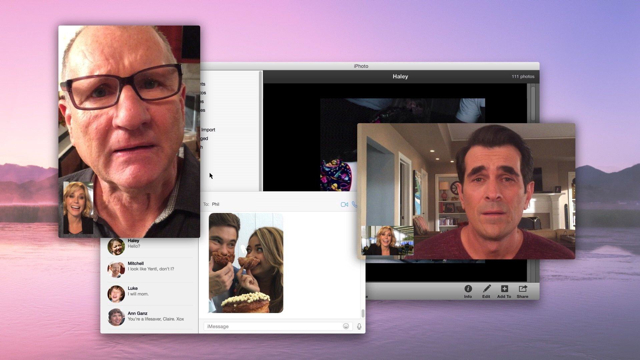 “The decision to contain the story to the desktop presented fresh opportunities for visual gags, as when Claire’s attention wanders off to a Pinterest page while she converses via FaceTime with her father’s much-younger second wife, Gloria (played by Sofia Vergara),” reports Re/code.

“At certain points in the episode there are three different screens open on Claire’s computer — one shows her sitting in the airport, while the others show various family members in their respective homes,” adds The New York Times. “To create a sense that the actors were all actually communicating on FaceTime, the scenes were all recorded simultaneously, sometimes with as many as three sets rolling at the same time.”

“I have two daughters at college, and we do a lot of FaceTiming,” said Steve Levitan, the show’s co-creator and executive producer, of the episode’s inspiration. “One day I was on my computer, and I had some emails open, and some websites, and then my daughter showed up. But I couldn’t only see her, but I could see me.”

The episode was also influenced by “Noah,” a 17-minute short by Canadian film students Walter Woodman and Patrick Cederberg, which depicts a breakup that unfolds entirely on a computer screen through Facebook and messenger apps.

According to Levitan, Apple provided iPhones for the production, but did not pay for product placement.