Google confirmed that it plans to add native support for 360-degree videos for its YouTube streaming video service “in the coming weeks.” At the 2015 CES, French company Giroptic revealed that its soon-to-be-released $499 360cam — a rugged, lightweight, waterproof camera looking to take on the GoPro — would be the first 360-degree camera that YouTube plans to support. The announcement could also be good news for users of new cameras such as the Bublcam, Kodak SP360, Ricoh Theta, VSN Mobil V.360 and others.

According to the press release, the palm-sized, 6.3-ounce camera features three, 185-degree fish-eye lenses and can capture 4K photographs and 2K video (see the video demo here). It also includes integrated Wi-Fi to post or stream in real-time with automatic geotagging. 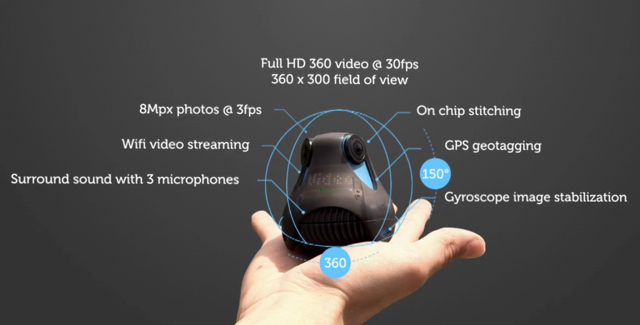 “Giroptic says Google will also allow users of its camera to upload videos to Street View, allowing users to fully map locations wherever they go,” The Verge reports. “Most companies who offer 360-degree cameras can only display the video in their apps or in specialized video players in the browser, but with YouTube natively supporting 360-degree video natively, the tide is quickly shifting.”

“Where these videos could get really interesting is when you can view them in virtual reality,” suggests Gizmodo. “Samsung just launched its Milk VR service to provide 360-degree videos for the Gear VR headset, but YouTube and Google Cardboard could make for a potent combination too.”