What the introduction of the iPhone was to the world of personal computers, wearable technology may become to the current, rapidly evolving tech landscape. And unlike some industry experts, Cisco Chief Futurist David Evans doesn’t believe the personal computer is on its way out, but rather, it’s becoming more personal — and even smaller. Wearable technology like Google Glass will become prevalent, and other seemingly futuristic advances are right around the corner. 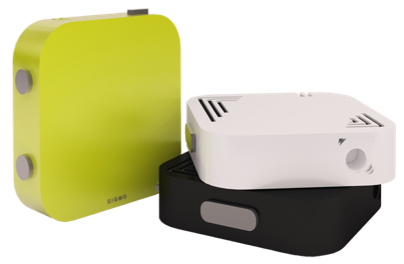 One such advancement Evans mentions in a LinkedIn post is SIGMO, a small square device that clips to your shirt and can translate 25 different languages using cloud technology (pictured here). The invention was funded several times over its original goal on the crowdfunding site Indiegogo, and the device itself costs only $50.

Other examples of wearable technology Evans brings up are electronic sticky tattoos worn by pregnant women to monitor fetal activity and heart rate, and the already existing devices like Fitbit which record heart rate and other levels during exercise and sleep. But first will come the smartwatch, the even smaller and equally as powerful alternative to smartphones. Such devices, Evans says, are “helping drive the Internet of Everything,” or, IoE.

Each decade since the first computer, its technology has decreased in size by a hundred times, according to Evans. And he mentions one particularly stunning example of that, saying, “The computing power of the ENIAC computer that filled a whole room back in 1956 now fits inside the tiny chip of a ‘musical greeting card’ that you can buy for $4 at your local store.”

Now, he says, “the smartphone in your pocket is many times more powerful than the PCs of just a decade ago.”

Put that way, it’s not too hard to believe that these predictions will, in fact, come to fruition. Whether in shoes, glasses, skin or watches, wearable technology will continue to evolve in seemingly unlikely ways over the next decade. And if history is any indicator, it will go beyond what most people now could imagine possible — just as was true only a few years ago.