Walmart announced that its VUDU media delivery service will introduce a new feature that allows customers to share content from their UltraViolet collections. The “Share My Movies” feature will enable users to share movies and TV shows with up to five friends or family members by simply entering their email addresses (they also need to be VUDU customers). The company hopes that the ability to share libraries will encourage more consumers to sign up for the service.

“And since invited users watch through their own VUDU accounts, they can use their favorite devices without it counting toward your VUDU device limit,” explains the VUDU Blog. “They can download or stream your movies and shows on just about any device — from a smartphone to a smart TV. Share My Movies also supports up to three simultaneous streams, so you can watch together, even when apart.” 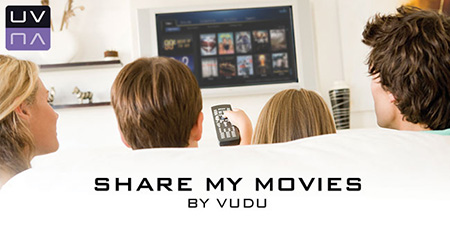 “There are many great things about the switch to digital,” suggests TechCrunch. “You can now just turn on your smart TV or your Roku or whatever and either browse Netflix for random stuff or purchase new movies and stream them right to your home. But one thing that’s missing is the ability to share those films. In fact, when Hollywood and tech execs first came up with the idea behind UltraViolet, many people saw it specifically as a ‘new form of DRM’ to stop people from sharing.”

Although there are a number of UltraViolet storefronts currently available, VUDU hopes to become known as the place to own digital copies of movies. Last year, it introduced a service for DVD owners to go “disc-to-digital” for a small fee. Its new sharing feature could be seen as another step to encourage the use of digital lockers.

“By doing so, it’s hoping to increase the number of UltraViolet customers it has on its platform, which in turn will lead to more UltraViolet sales,” notes TechCrunch.