Startup camera company Light just debuted the L16, which weighs less than a pound, has a form factor small enough to fit in a back pocket and replaces one large lens with 16 smaller lenses and sensors that produce a 52-megapixel image. That image compares to the typical smartphone’s 12-megapixel image or 30-megapixel image from a DSLR camera. The L16 — intended for photography, not video, and priced at $1,950 — also offers an adjustable optical zoom that allows the user to change the level of background blur and focus.

The Wall Street Journal reports that its reviewer has taken over 2,000 photos with the L16 and believes “a lot of photographers … would benefit from” it. The camera still has its “kinks in focus and speed,” that will likely be corrected in software updates. 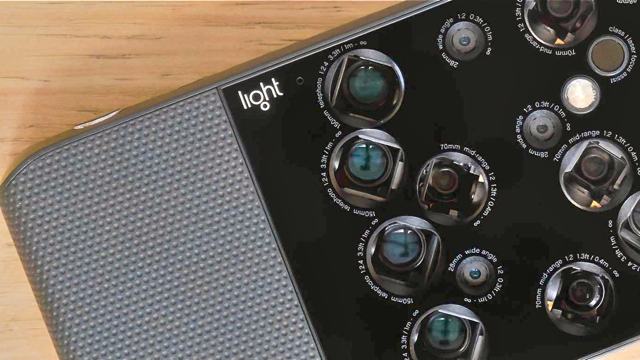 “What’s radical about the L16 is that it makes camera software as important as the hardware,” since the typical camera relies on a larger sensor to capture more light, and larger sensors require larger lenses. With the L16, a lens array and software capture “different perspectives — some are wide angle, others are long distance, two are black-and-white.” The L16 then “quilts these overlapping shots into one megapicture, with more data than cameras twice its price.”

The camera also provides a low-resolution preview and the ability to offload 150MB files to a Mac or PC and then “develop” them, “even exporting raw files to edit in Photoshop.” The trade-off is that “because of the way the L16 tiles telephoto shots on top of wide-angle shots, the resolution can be higher at the center, and dip when you zoom.”

There are fine-tuning tools to fix problematic edges, and the software also lets the user “make micro adjustments to the focus point.” The camera’s software also sets the depth of field, using “depth data collected by its stereovision lenses to recreate the effect in software, entirely after the fact.”

The question for “serious photographers” is if they can swap out their “trusty DSLR” for the L16. The WSJ reviewer has taken the camera on “a serious vertical hike” due to its compact size, and taken “some absolutely gorgeous shots.” The battery “always lasted through a long day of shooting, and there’s built-in storage for some 1,500 massive shots.”

There is some noise in low-light conditions, and in a side-by-side comparison with images from the $3,300 Canon 5D Mark IV, the Canon’s images excelled in “color and contrast, not to mention its quick focus in the field.” But “Light noticeably improved the L16’s software during my testing … especially working on focus and low-light performance.”

“Order one now only if you’re up for being part of Light’s journey,” is the answer.