In his keynote address at CES 2017, Under Armour founder/chief executive Kevin Plank had a long wind-up to the afternoon’s highlight: multiple gold-medal Olympian Michael Phelps on stage, encouraging everyone in the auditorium to get up and “Jump Around” to the infectious beat of the House of Pain anthem. Phelps was doing more than dancing. All it takes is six jumps for him to activate his brand new Under Armour shoes, connected to the company’s MyFitnessPal app as of February 1. The company also introduced a new focus on sleep.

Under Armour debuted its first connected shoe, the Gemini 2, last year. With the Gemini 2, Under Armour harvested the data that, says Plank, “helped us become experts in running and how people are using our products, to make a better one.” The three new models, all with built in sensors, are the Gemini 3 for long distance, the Europa for stability and the lightweight Velociti. 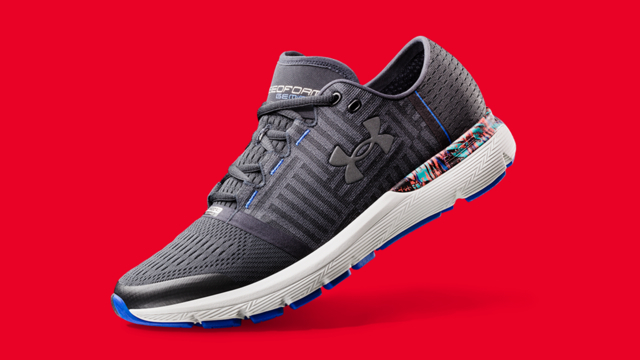 “We can send updates to any of these shoes, much like you’d get updates to your smartphone,” said Plank. “And our platforms remain agnostic and will stay that way.”

It takes three days for the shoe/app to learn the user’s profile. From then on, after the six jumps, the app will offer a green, yellow or red light, to signal whether the user can go all out, stay even or take it easy. “I wish I had this four years ago,” said Phelps. “Technology helps me get the best out of myself. Going from an athlete to someone trying to stay in shape, this allows me to listen to my body doing sports outside the water.”

Under Armour’s apps have also collected data on 2.6 billion workouts logged, a basis for improvements and enhancements. In a partnership with IBM, the company created Under Armour Record, which will allow the user to create a complete picture of sleep, fitness, activity and nutrition. So far, Record (which works on Samsung devices and many fitness platforms) has 194 million registered users, with 1 million added since Christmas.

Sleep is a new focus for Under Armour. Arianna Huffington joined Plank on stage to describe how she engaged him in a conversation at a dinner party about his lack of sleep. What Plank learned made him a convert. “We cross-referenced running with sleep and found that runners burned more calories with a greater amount of rest,” he said. “It led us to an insight into the science of sleep and recovery.” Under Armour is now partnering with Huffington’s Global Thrive initiative.

Plank also partnered with sleep scientists at Johns Hopkins University’s medical school to created the Body Clock, which tracks sleep patterns including duration, time spent awake and consistency. “Your sleep needs a strategy,” explained Plank. “What we found is that what’s important is that you get enough sleep and are consistent enough about getting it.”

Patriots quarterback Tom Brady got involved when he told Plank how far infrared waves improved his sleep, and challenged Plank to embed it in pajamas.

After two years of research and work, the result is a brand new sleepwear apparel line, built with Tom Brady, and utilizing a bio-ceramic print on the inside that activates the body’s natural heat and reflects it back as far infrared waves. “These aren’t just pajamas,” said Plank. “They’re advantages. If we’re going to change how athletes sleep, we should change how they dress for sleep.”

With these new announcements, Plank is announcing the company as digitized and data-driven. “Our saying is that data is the new oil,” he noted. “2017 is a year we embark with a true digitization of our brand.”