Twitch will debut its reality competition show, “Stream On” on March 8, featuring 14 online video personalities vying for a $60,000 prize over an 11-week period. The competition and its prize money is intended to help finance and promote the streaming careers of new Twitch Partners who are building audiences already, but have yet to break out. Those selected to compete are gaining recognition for talent beyond gaming, such as art, comedy, cooking and music. The show will be produced by Twitch Studios and air live on Twitch.tv. 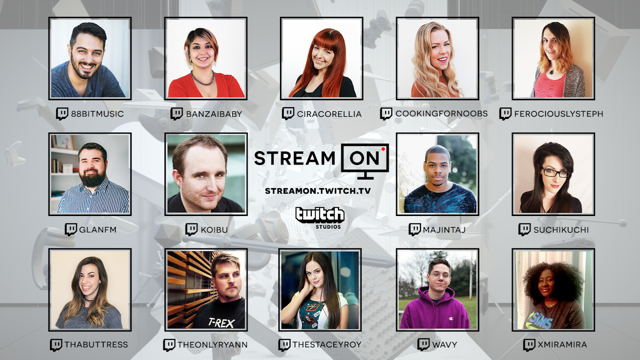 “While Twitch Studios has handled production for some competitive gaming events on stages at various events like PAX and TwitchCon, it hasn’t yet produced any live show of this size and scope,” reports TechCrunch.

Contestants will face challenges on the program that test their streaming skills (for example, “getting their viewers to respond to calls-to-action”), while judges analyze their performance.

“Take the time to get to know and follow these streamers,” suggests Twitch, “because you will have the opportunity to support your favorites during the weekly recap show by voting through a custom-built Twitch Extension.”

The goal is to promote Twitch and its Partners, while educating potential creators with tips for success, possibly even launching new careers in the process.

“YouTube does this as well,” notes TechCrunch, “most recently with its announcement last month of a $5 million investment in positive content, and hundreds of millions into original productions for YouTube Red.”