Thalmic Labs Aims to Change How We Interact with Computers

Since Thalmic Labs debuted the Myo muscle-sensing armband, which lets users control a computer with a wave, the Y-Combinator startup received a $120 million investment from Intel Capital, the Amazon Alexa Fund, and Fidelity Investments Canada; and hired Samsung veteran Tara Kriese as its CMO and former Under Armour wearable devices head Abhi Bhatt as VP of Product Experience. The 100-employee company also opened a 50,000 square-foot manufacturing facility in Waterloo, where it’s working on its next, still-unannounced product.

Business Insider describes what makes Myo such a groundbreaking product. By sensing the tension in the wearer’s muscles as he moves, Myo lets the user control electronics with a gesture. But Myo is also getting attention from an array of researchers, including Spanish surgeons, who use it to “navigate medical records while in the middle of surgery” and Johns Hopkins researchers, who are using it to experiment with using it to control prosthetics.

Thalmic Labs chief executive Stephen Lake says his company’s mission is to look at how we interact with the next generation of computers. 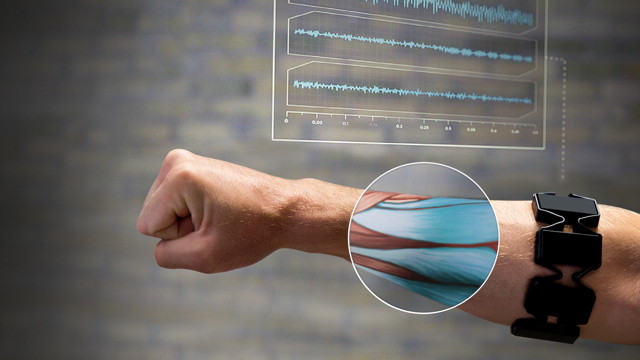 Lake says the stakes are high: a potentially dystopian future where “what we perceive and see is taken over” by computers that make choices for us because we don’t have a good way to control them. In other words, “if you don’t control the computer, it will control you.”

In 2011, Lake was a robotics student at the University of Waterloo with his future Thalmic co-founders Matthew Bailey and Aaron Grant. “We started working on [Google Glass] before Glass was even announced,” Lake recalled. The trio knew that the future of controlling the computer went beyond a mouse and keyboard, and that Nintendo Wii and Xbox Kinect were “either too cumbersome to carry around, too inaccurate, or both.”

Lake and his colleagues eventually created the proof-of-concept for the Myo armband, forming Thalmic Labs in 2012. Controlling via gestures is the same idea as the Xbox Kinect, but because the user wears Myo, it is self-contained and reliable. For his part, Lake hopes to turn “its philosophy of human/computer interaction into a big business.”

Because Thalmic’s lab is located next to the former BlackBerry headquarters, it has hardware and software talent galore to choose from. That means the startup will stay in Ontario where the cost of living and doing business are lower than Silicon Valley. Last, to keep Myo from becoming a low-margin commoditized product, said Lake, “it’s critical that Thalmic takes control of the whole equation, from research to software to hardware design to manufacture, hence the big investment in the factory.”