Tech Session: Developing MEMS and Sensors for a Smart IoT

A group of movers and shakers in the MEMS/sensors industry gathered during a day-long conference at the 2015 CES in Las Vegas yesterday to discuss how their technologies need to evolve in order to enable a smart Internet of Things. Panelists addressed the need for improved sensing technologies, smaller form factors and better integration. Companies represented during the early afternoon session included SunEdison Semiconductor, IBM, Evernote, ARM and virtual reality startup Virtuix.

Most MEMS are designed for use in mobile phones, noted Virtuix President and COO David Allan, and that became a problem in his work in creating an affordable VR locomotion platform. “We were developing a product with 16 sensors that needed to be super low-latency,” he explained. “We had to hire a firm of engineers to do our sensor fusion for us, which was extremely complicated.” 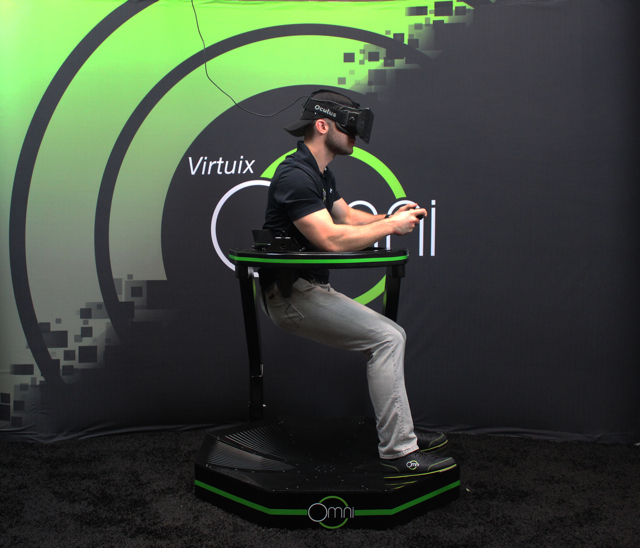 The second problem, continued Allan, was data transport. “For a low latency system in VR, we need to extract data quickly, with low latency,” he said. “With a wearable sensor, you want to use Bluetooth low energy to save on battery life, but you can’t because it won’t deliver the throughput you need for a low-latency solution.”

Virtuix is the developer behind the anticipated Omni VR treadmill (pictured right), the latest version of which is being unveiled at CES.

Mark Ireland, VP, IBM Microelectronics, Strategy and Business Development, adds another technology challenge for wearable developers. “Form factors will matter,” he said. “Some of these wearables are still pretty bulky and low power integration on the device is key. New technologies like Bluetooth Smart and 5G are going to help make this happen.”

John Hoye, director of partnerships at Evernote, added his perspective. “We realize this area is going to fundamentally change the design and deployment of Evernote,” he said. “Mobile results in an increased number of touches every day, and with wearables, it grows exponentially again. The notion that the same app will be running in those different environments is just not true.”

IBM’s Ireland promises that his company will start creating more customized silicon aimed at IoT developers but, in the short-term at least, these developers are stuck adapting MEMS for the mobile phone industry. Charlene Marini, VP, embedded segment marketing for ARM, notes that change is coming. “Many new standards and partnerships are bubbling up to deal with various layers of the sensors,” she stated. “We’re working in a number of standards bodies that we feel will advance interoperability and also working on a networking application OS for very low power tiny devices that include connectivity.”

Hoye encouraged MEMS manufacturers to start engaging more directly with wearables developers now. “Talk to the people who will develop applications on top of the sensors,” he said. “Ask their needs.” Marini notes the need for collaboration among MEMS manufacturers. “It’s a bit unheard of, but that’s the only way we’ll be successful in IoT,” she said.