Microsoft announced last week that it has sold 100 million licenses for Windows 8 since the software’s release six months ago, approximately the same number it sold for Windows 7 in the same time range at its release. The company made bold changes to its software, which included replacing the traditional interface with a screen of tiles. However, there has a been a negative reaction from some customers and the company admits the moves may have been too aggressive. A soon-to-come update may help those who are disappointed. END_OF_DOCUMENT_TOKEN_TO_BE_REPLACED

The Cleveland Museum of Art is introducing new technology to enhance the visitor experience. With a special application designed for the iPad and a 40-foot interactive touchscreen, patrons can personalize and share tours, bookmark their favorite art, and access special videos and behind-the-scenes information for different exhibits. In the process, the Cleveland Gallery One program may serve as a model for museums and other venues. END_OF_DOCUMENT_TOKEN_TO_BE_REPLACED

Wall-Sized Touchscreens in Our Near Future, Says Microsoft

According to Microsoft’s vision of the future, our lives will soon be impacted by large, wall-sized touchscreens, on which we will perform daily tasks, communicate with loved ones and much more. Additionally, all of our gadgets will respond to our voice commands and we’ll be able to seamlessly transfer information between devices with just a few swipes and/or taps. END_OF_DOCUMENT_TOKEN_TO_BE_REPLACED

Wearable Tech Gadgets Put Users Back in the Physical World

New trends in the tech gadget space are returning to a consumer more engaged with his or her surroundings. Whereas smartphones and computers require that people’s attention go toward a screen, pulling attention away from the real world, new innovations may lead to the consumer becoming once again more engaged with the physical world. Many of these new ideas involve wearable devices. END_OF_DOCUMENT_TOKEN_TO_BE_REPLACED

Google’s latest hardware development hit stores last week as the company unveiled its first touchscreen laptop powered by the Google Chrome operating system. Called the Chromebook Pixel, it costs $1,299 for the Wi-Fi only version and $1,449 for the upcoming version with built-in LTE wireless technology for use on-the-go. The LTE version goes on sale in April with Verizon offering special wireless plans for new owners. END_OF_DOCUMENT_TOKEN_TO_BE_REPLACED

The touchscreen changed the way users could interface with their devices and opened up a new realm of opportunities for software developers. Smartphone manufacturers, and more recently, tablet makers, have been exploiting this technology almost to a fault, lopping off nearly all the physical buttons from their designs, and with it, the physical connection between user and device. Tactus Technology aims to provide both with on-demand, transparent, physical buttons via their dynamic tactile interface. END_OF_DOCUMENT_TOKEN_TO_BE_REPLACED 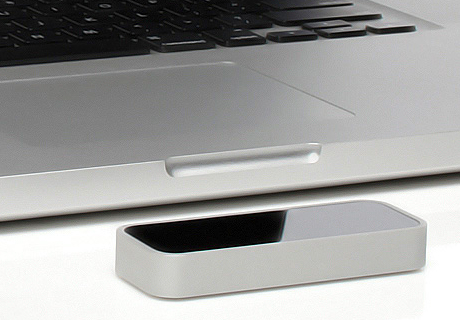 Squashing Rumors: Why Apple Will Not Release a 7-inch iPad Mini

The Rumors are True: First Look at the Amazon Kindle Tablet

Touchscreen Inventor Says Haptics will be Next Step for Mobile Devices