New Nexus 7 with Android 4.3 to Be Available by Next Week

While an official Google event is scheduled for today that may or may not include tablet news, a new Nexus 7 is rumored to be offered at Best Buy beginning July 30th. The leaked Best Buy flyer reveals updated hardware, with a 1920 x 1200 high definition display, 16GB of storage, and a price of $229. If true, Google will offer a seven-inch HD tablet ahead of Apple. The current iPad mini does not have a high-definition screen and has a starting retail price tag of $329.

“Until there’s an official Google announcement, we obviously don’t know for sure if a refreshed Nexus 7 even exists,” explains GigaOM. “However, there’s too much evidence of late to discount it… And this Wednesday, Google is holding a press event with Sundar Pichai who heads up Google’s Android efforts.” 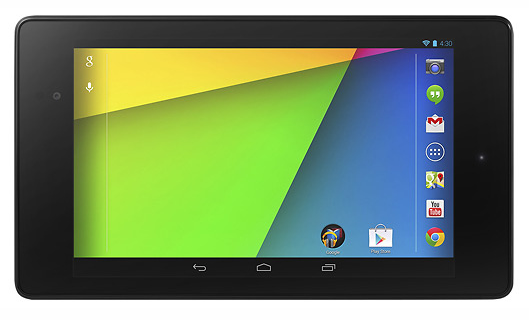 There has been much speculation on the features of the new Nexus 7, especially that of a high-definition touchscreen which would be one of the most significant upgraded features from the previous device. If real, the Best Buy flyer only confirms the release of the device before any official announcement.

The low price may signal that Google wants its tablet to be a more cost effective alternative to Apple’s iPad mini, which does not have a high-definition display. Selling the Nexus 7 in the U.S. may be a first for Best Buy, and it suggests that Google will push to expand retail availability of its device.

A high-resolution image from the leaked Best Buy ad can be found at Phone Arena.

CNET will have live coverage of Google’s “Breakfast with Sundar” event, beginning at 9:00 am Pacific time today.

UPDATE: Multiple reports this morning note that Best Buy has posted official images (such as the one above) on the Nexus 7 pre-order page. “The specs we’ve seen previously have been confirmed by the two Best Buy pages, with the highlight being a 1920 x 1200 display resolution, leading to a fine 323ppi pixel density,” reports The Verge. “There’s also 2GB of RAM, a 1.5GHz Qualcomm Snapdragon S4 Pro 8064 processor with Adreno 320 graphics, and the rear camera’s resolution is 5 megapixels. The 16GB Nexus 7 costs $229.99 and the 32GB option is listed at $269.99.”