TechCrunch describes some of the other VR experiences at Sundance. “Crystal Vibes” (example below), designed by Dr. Benjamin Outran, is “a less frenetic but wildly psychedelic introduction to virtual synesthesia.” 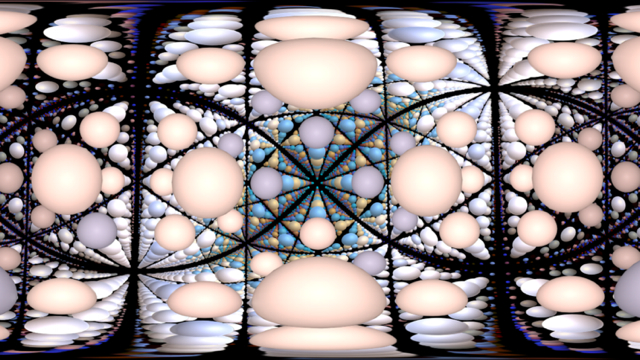 “What’s beyond virtuality reality are these embodied experiences, not just for your eyes or ears but your whole body,” he said. “People want to experience things they’ve not experienced before. Maybe it’s a cheap and easy way to do it, but just to overwhelm people’s senses with bright colors and synesthesia is one way to achieve that goal.”

In “Tree,” the user plants a real seed in a box of soil and then, with the VR headset, has the experience of being that seed, “watching and feeling as you grow from beneath the ground and sprout into a rain forest sapling.” Real senses come into play as the “tree” grows beyond the canopy and “a real-world fan blows cold air in your face.” When humans enter the forest, the user hears chainsaws buzz and then topples, “while a haptic floor shakes your legs.”

“Heroes” – which TechCrunch says “stole the show” – mixes VR and AR, demonstrating “how multiple mediums can be combined to provide a more robust set of perspectives on a theme.” To the soundtrack of the David Bowie song, the user is “on a VR stage with two acroyoga dancers lifting and climbing each other before they grow to Godzilla-size to spread love through the city.”

Then the user is “placed into a specially-adorned HoloLens, which projects graphics on its clear visor so they seem to appear in the real world around you,” and as the user walks around a “custom-designed room of props,” small versions of the dancers “prance in the air,” controlled by the user’s prompt, “And then,” which causes them to dissolve and reappear elsewhere.

Upload VR, which reports that “new VR productions at the festival show an enormous leap in quality from its first real appearance there in 2012,” also mentions Chris Milk’s “Life of Us,” a “shared VR journey that tells the complete story of the evolution of life on Earth,” Felix & Paul’s “Miyubi,” a comedy that takes “looks into the life of a family from the 1980s from the perspective of a Japanese toy robot,” and Oculus Story Studio’s tearjerker “Dear Angelica.”