Snap’s first version of its Spectacles was not a big hit, and the company is trying again with its second version, stating its commitment to hardware. Snap began working on this second iteration when the first one launched. The form factor of the second version Specs is slightly different: no more yellow rings around the lenses and much thinner temples. The Specs, priced at $150, also come in new colors with two variations on mirrored lenses. But the big changes address all of the criticisms of the first Spectacles.

Wired reports that, “Snap is teaming up with Lensabl.com to let people order prescription and polarized versions of Spectacles” that are sunglasses (not clear lenses).

The improved features include the ability to record and transfer video footage in HD by default, rather than having to choose SD or HD. Snap has added a new Wi-Fi chip that will make data transfer faster. Other features include “a new image sensor, a redesigned set of lenses, and other improvements to the ‘image-processing pipeline’.” 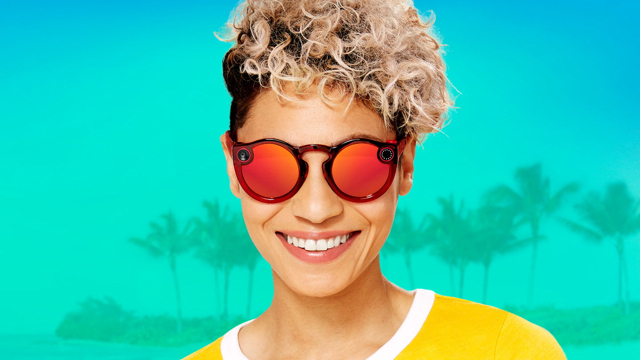 The user can also “capture and transfer still images with the glasses,” including the first version, via a firmware update.

Spectacles, says Snap, is a video-first project, which is why you quick-press the button to capture a 10-second video. Improvement in image processing is “really noticeable,” and the new Spectacles also have “crisp audio” and are water-resistant up to one meter for 30 minutes. The battery for the new version is smaller, “but Snap insists you should get the same battery life as before, which it’s now quantifying as 70 snaps and transfers, not just snaps.”

The conclusion is that the new Spectacles are “a more appealing product than the first pair of glasses.” The reviewer’s only beef is Snap’s proprietary video format, which “looks great as wide-angle footage in the Snapchat app, but still appears in a circle in any application that isn’t Snapchat.”

The Wall Street Journal reports that vice president of hardware Mark Randall said, “his team has put in place a more measured marketing plan.” The company will sell Spectacles only online, he added, and plans to promote the glasses more for what they can do “rather than their fashion appeal.” To solve its supply-chain problem with the first version, “Snap is also using more mainstream suppliers that require less lead time to produce components.”

“We look at hardware as a very long-term strategic investment for the company,” said Randall, listing “augmented-reality lenses, hardware and the Snapchat messaging app” as the company’s “three pillars.”