Several companies have offered drones that can, more or less, follow a target and avoid obstacles. But now a new company, Skydio, has introduced the $2,499 R1 drone that shows significant promise. The R1 doesn’t use GPS or wearable trackers for 3D vision tracking, yet is able to avoid obstacles from all angles at speed (about 25 miles per hour). The high-quality device, which Skydio describes as a “self-flying camera,” is also easy to use. The R1, via camera lenses that point up and down on a two-axis gimbal, also records 4K video.

Engadget reviews the R1, and marvels at its ability to “duck and dive sign posts, benches and tree cover.” Its “four propellers are surrounded by a prop-guard, which can’t be removed,” making the form factor the size and shape of a large pizza box. The operator does have some controls: with a mobile app, the user can “move the drone up and down or toward and away from you” and also “yaw (spin on its central axis) to tweak what’s in the frame and pan the camera up or down.” 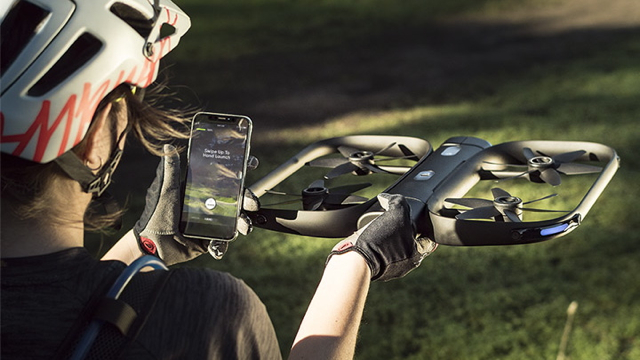 To set the target, the operator identifies him or her and taps, via the app. Tracking options are “follow, lead, side, orbit and tripod,” the latter which keeps the R1 in place, rotating to keep the target in frame. Tracking modes can be switched during flight. The R1’s image quality is also good: “on par with what you’d expect from a GoPro (but with less fish-eye by default).”

The reviewer notes that, despite its many advantages, the R1 has its flaws; he was able to outpace the R1’s camera, making it lose track of its target and come to a standstill. Battery life is also a mere 16 minutes — and is impacted by such factors as wind. When the battery dies, the R1 “just stops and touches down,” which could make for a difficult landing.

Still, the reviewer found that the R1 is much simpler to learn than competing products from DJI, AirDog, Yuneec, Karma and others, all of which “require some degree of learning or oversight.” “The simplicity, combined with the clever technology conspire to make a truly user-friendly experience,” he said.

The R1’s biggest “problem,” suggests the review, is its price. “For the $2,499 that Skydio is asking, you could buy three DJI Mavic Airs, or even a combo Mavic Air and Mavic Pro Platinum and still possibly have some money left over.” That, it concludes, will make it “a hard sell for most consumers.”