Skidmore College, a liberal arts institution in Upstate New York, is sending its student candidates a new form of acceptance letter. Each package includes a cardboard VR viewer with a link to an immersive, 360-degree video that illustrates life at Skidmore. The 360VR makeover is an attempt to go beyond the traditional college tour or promo video. “This was a chance to answer one of the top questions accepted candidates ask, which is what is it like to be a Skidmore student when I’m not in class,” explained Luke Meyer, director of marketing and engagement.

The 3-minute video, available on YouTube, features snippets of campus life at Skidmore, including singers and musicians, dance performances, students lounging about in different settings, a hockey game, and more. “Creative thoughts matter” is the tagline.

“Letting them experience something that was more authentic so they can see themselves as part of the Skidmore experience was the main goal of this campaign,” said Vicki Riley, manager of videography and digital resources. 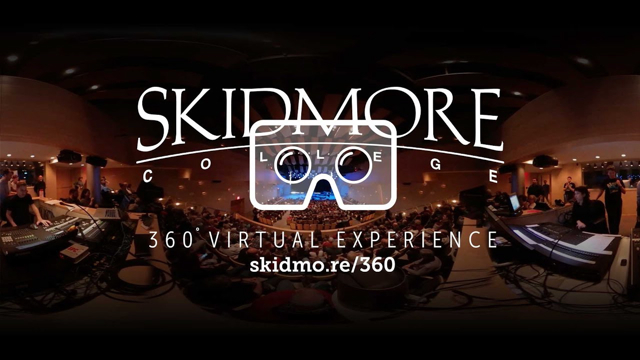 According to VRScout, this is not the first time immersive video has been used in an attempt to engage students. “Princeton, Kent State, Yale and many other schools have used immersive videos as a way to bring the college tour to the student. But Skidmore College is one of first to use it as a way to notify students that they’ve been accepted into college.”

“We’re trying to tell a story versus just dropping someone into an environment,” said Meyer. “We didn’t want the immersive experience to be tour based, our hope was to capture snippets within each piece of immersive video so that it played into the much larger Skidmore experience.”

Skidmore is considering the use of AR and VR for future communication with students and alumni. “Using augmented reality with a LookBook or college magazine to bring printed materials to life to engage our Skidmore community and new students will play a big part in how we communicate with them,” said Diane O’Connor, director of campus and media relations.