Simple.TV’s streaming DVR will be coming to the U.S. on December 12th, with recording and live streaming available for local devices, as well as TV delivered to Android and iOS apps. The $250 DVR supports several browsers and Roku players, and may even offer a Windows Phone app down the road. With options for premium services, TV-loving consumers who like to catch up with shows on-the-go will appreciate the added features.

According to Engadget, “avid viewers can spring for a premium service that offers remote viewing, automatic recording and downloading either as an after-the-fact subscription ($60 per year, $160 lifetime) or bundled with the hardware ($300 per year, $400 lifetime).” 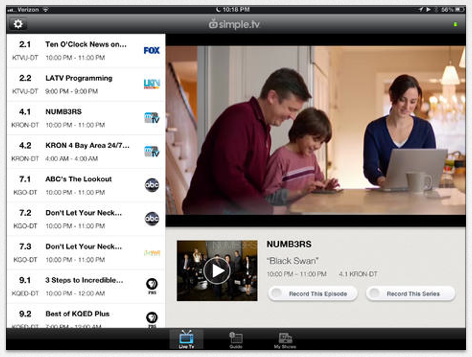 The DVR made it easy to sort shows by category in the site’s hands-on test drive, and the 720p feed on a Nexus 7 was described as “excellent.” There are also lower-quality settings available when users have bad connections.

The product’s biggest upgrade, Engadget says, is the added native Android and iOS apps for watching on-the-go. “The two clients have straightforward interfaces that make it easy to tune in live, catch up on a recording or — at long last — download episodes,” Engadget reports.

The design of the box is also totally new, partly due to what hardware partner Silicondust’s Mark Ely told Engadget is a “completely different” platform that improves upon the device’s performance. And a thoughtful touch: “You no longer have to interrupt one show to record another,” Engadget writes.