Mobile game maker SGN and 20th Century Fox released “Book of Life: Sugar Smash,” a companion mobile game for Fox’s new animated film. The two companies are sharing revenue from the game’s in-app purchases, which could translate to long-term revenue and marketing for both businesses. This revenue-sharing deal could also become a new model of partnership for future gaming and film companies. “Book of Life: Sugar Smash” is a free game available for iOS and soon Android. 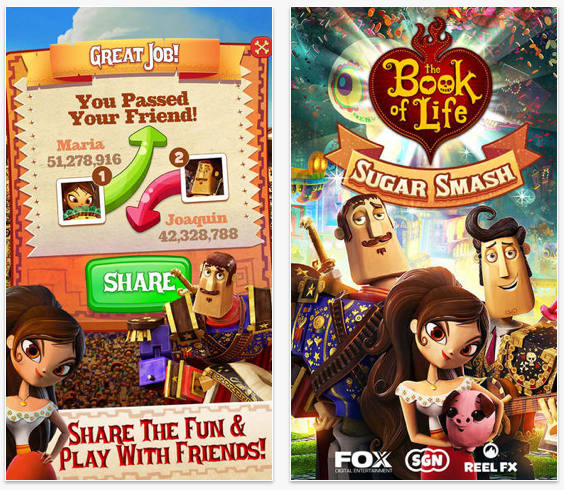 The partnership has potential to be mutually beneficial.

The game was released 10 days before the movie’s October 17 release date. By the time “Book of Life” comes out in theaters, thousands of people will have seen the app in the app store or even already started playing.

Fox is hoping those players will also buy a ticket to see the animated film. SGN is banking on the high conversion of rates of people who buy games from recognizable brands like 20th Century Fox.

Usually, film companies only profit from a one-time licensing fee for their content. However, this deal is the first of its kind to share the revenue in the long-term, according to Deadline Hollywood. Fox provided the art, animation, storyline, and audio for the game upfront, but both companies will continue to make money from players’ in-app purchases of virtual coins.

SGN plans to add new content to the game every two weeks, so the story won’t end when “Book of Life” is released. “With this game we are able to broaden the film’s universe, enabling the audience to interact with the story long after they’ve left the theater,” said Rick Phillips, SVP, Fox Digital Entertainment.