Rollable, High Definition TVs and Phone Screens May Be Next

Cracked screens may be a thing of the past once high-resolution, ultra-thin screens make it possible to roll and bend television and phone displays. These screens are made out of phase-change materials that can exist in two states: an ordered crystal and a disordered glass. LG has already developed an 18-inch, 1-million-pixel television screen that can be rolled into a compact cylinder. By 2017, LG is hoping to use this technology to make a 60-inch rollable TV. 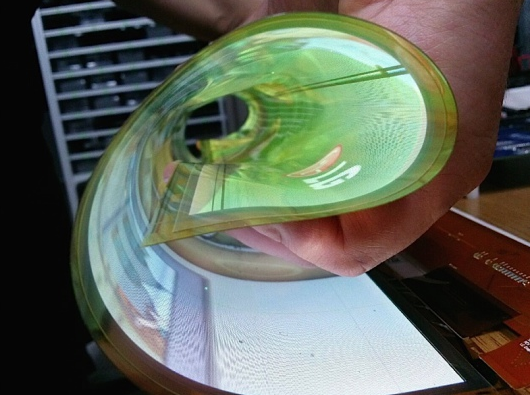 Rollable screens are made out of phase-change materials that are already widely used in optical devices and electronic memory devices. Amazon’s Kindle Reader uses a similar technology to make “electronic paper” displays.

In rollable TV screens, the inner substance made of germanium, antimony, and tellurium switches between states by cooling the mixture at different rates. The phase-changing cycle can be performed at an incredibly fast speed of more than one million times per second.

The fast speed makes playing videos possible. Now the possibilities for a flexible screen are endless. Wired predicts, “With a flexible, ultra-high resolution screen, a PCM display could be made into a programmable contact lens — like Apple’s Retina Display, sized for your retina.”

However, a few flaws in the technology still need to be worked out. For example, the displays have 10 times less contrast than current LCD screens because the colors appear washed out.

LG has already developed an 18-inch version of a rollable TV with a 1200×810 resolution. The prototype is flexible enough to roll into a tube that has a three-centimeter radius. Polyamide film replaces the typical plastic on the back of the screen to give the screen flexibility and stability. According to Engadget, LG Display’s SVP In-Byung Kang is confident that the company can develop an Ultra HD, flexible OLED panel of more than 60-inches by 2017.