Quip, a company founded by Google vets Bret Taylor and Kevin Gibbs, recently released its mobile creation and collaboration tool for desktop computers. The toolset enables users to connect desktops and mobile devices to the cloud for a version of distributed computing, usually the purview of large data centers. Part of an emerging trend to use as much computing as possible, Quip’s solution has similarities to Amazon’s Silk browser in the Kindle, which has features of local and cloud computing.

The Quip website details some of the software’s most appealing features. Chief among them is the ability for “everyone to edit the same version of the document at the same time from any device,” with just one document and one chat thread. Every document has a chat thread, permitting communication without email.

Shared task lists and spreadsheets can be added. The software works smoothly on mobile devices and can be used offline as well as online. 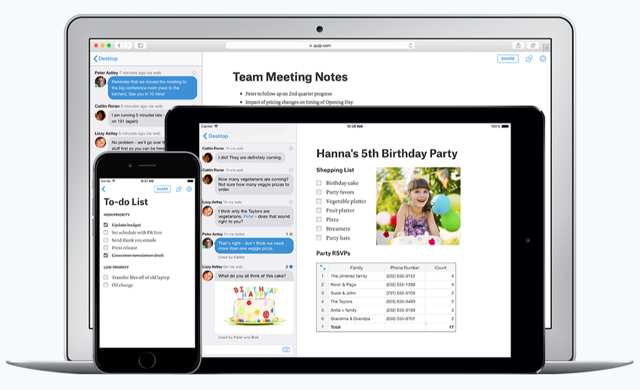 According to The New York Times, Quip says its software is used by 30,000 businesses including Instacart, Stripe and CNN. In addition to a free version for consumers, Quip offers a business version that begins at $12 per person per month.

“Quip is not just reinventing Microsoft Office 25 years after the fact,” explains NYT, noting that users can create or update a document while out of Wi-Fi range, with changes synced with the cloud and all other devices.

“The implication here is, you have computing in the form you want for wherever you are at the time,” said chief executive Taylor.

The company added desktop tools when the founders noticed that, at some times of day, 50 percent of the work was on desktops, accessing a Web-based client. “It’s not mobile only, or mobile first,” Taylor noted. “It’s a multi-device world.”

“Quip’s move from browsers to something closer to a mobile-type app built for a desktop could be a standard,” suggests NYT.