Kids who watch shows such as “Dora the Explorer” and “Blue’s Clues” are often asked questions that encourage responses, but the TV of course does not interact beyond that point. This problem is being solved by San Francisco startup ToyTalk, a company launched by former employees of Pixar Animation Studios. Their first iPad app, “The Winston Show,” features Winston and his sidekick Ellington posing questions to their young viewers and then responding intelligently. 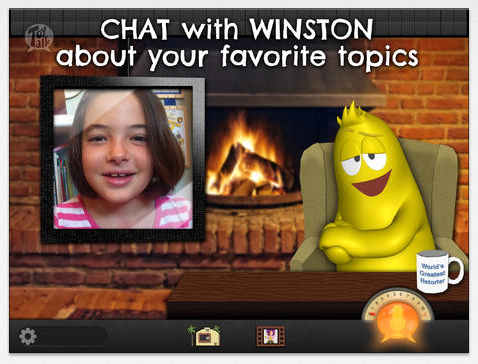 “We were possessed by the idea that creating entertainment through conversation is something possible,” says Oren Jacob, co-founder and CEO of ToyTalk. Jacob claims that a large part of his inspiration for “The Winston Show” came from watching his kids Skype with their grandparents.

“Martin (Reddy, ToyTalk’s co-founder) and I decided that we could have a conversation between the audience and characters much like having a conversation with grandma and grandpa,” explains Jacob.

“The app, which is available for free in the App Store, transports its guests to a TV studio lot with five separate sound stages — six hours of activities in all,” reports Fast Company. “There’s the ‘Win With Winston’ quiz show, which asks players about everything from nocturnal animals to world hunger. Another called ‘You vs.’ that pits the player against any number of guests including Marie Antoinette and a blue whale. And there’s a clever spin on Masterpiece Theatre (and Franklin D. Roosevelt) called ‘Fireside Chat With Winston.'”

“Winston might say, ‘Are you an astronaut?’ As the child answers, voice recognition software uploads responses to the cloud and converts speech to text.”

Next, “we pass it through various natural language processors, and then we use the artificial intelligence engine we built to figure out what to say back,” says Reddy.

Artificial intelligence in PullString software is the brains for the app. PullString is essentially a multimedia scriptwriting tool that is utilized to create the skits for the app.

Conversations usually consist of five or six exchanges. If a child says something that is not part of the database, there are certain “fallback” answers. However, content is constantly being added to the database, with 3,000 lines recorded so far.

The process for producing “The Winston Show” is similar to the process for Pixar movies. “First, the story line is approved, followed by storyboard drawings. After that, every discipline gets unleashed simultaneously: Animation, writing, acting, compositing, user interface design, and sound. The staff concurrently labors on various show aspects and upcoming skits,” explains the article.

“Winston is a neckless, noseless, banana-yellow Brit drawn only with a torso, arms, and a face with eyebrows, oval eyes, and a mouth. There’s also the trusty sidekick, Ellington. Like Charlie Brown’s teacher known by her signature wah, wah, wah, Ellington doesn’t speak in words but in high-pitched syllables like a kid squealing underwater.”

“The Winston Show” is an evolving process. Such issues as weak Wi-Fi are being addressed as the show gains a larger audience. And as the show becomes more popular, ToyTalk may charge for the app.

“There is also talk of licensing the PullString technology so that an already famous character can start talking to its audience the way Winston does,” reports Fast Company. “With its software resident on Amazon’s S3 platform, ToyTalk is gaining valuable expertise in scaling mobile memory and storage. And while the company is staying mum about which vendor is providing its speech recognition technology, the partnership is expected to yield valuable data about the quirks of childhood speech patterns.”