Ourscreen is a service that allows groups of people to arrange private or public film screenings at their local cinema for movies that do not have a regular listing. It is similar to Groupon, in that a showing can be booked (by selecting a film, participating theater, and date/time), but is only confirmed once a certain number of people buy in. You can also search screenings that have been proposed by others and invite your friends. The larger the crowd for a given screening, the more affordable become the ticket prices.

The initiative is launching this spring in Picturehouse cinemas in the United Kingdom. The website currently lists seven theaters and around 200 films ranging from new releases to cult classics. 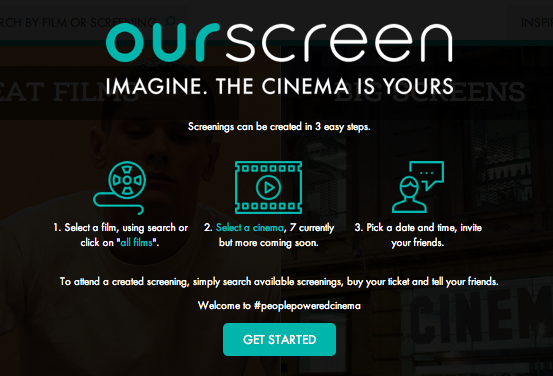 “It’s a journey that started almost three years ago and it is so exciting,” Ourscreen Director David Kapur told Wired.co.uk. “The inspiration was to try and create a piece of digital technology that supported the great work being done in cinemas across the UK. We are a small group of cinema fans and wanted to build something that enabled more people to watch more films in the cinema. Nothing beats a great film on the big screen.”

Kapur hopes to get community members to support their local cinema by reaching out to all tastes, whether that’s a current blockbuster or an arthouse documentary from a previous decade.

Ourscreen is currently a venture between Kapur’s team and Picturehouse, but plans to expand to independent cinemas and multiplexes.

“This is about democratizing cinema so we need a range of films and a range of cinemas,” said Kapur. “This is people-powered cinema!”