In a mission to make government agencies more understandable to children, and the general public, the National Security Agency has created a website filled with interactive games, cartoon characters and puzzles. The goal is to educate children about spying, and spark an early interest in related career paths. The CryptoKids website for “future codemakers and codebreakers” is aimed to make these occupations seem cool, and even has a section entitled “How Can I Work for NSA?”

“In the world of diplomacy, knowing what your enemy is planning helps you to prepare,” says a cartoon turtle named T. Top on the site. “But it is also important that your enemies do not know what you have planned. It is the mission of the National Security Agency and the Central Security Service to learn what it can about its potential enemies to protect America’s government communications.” 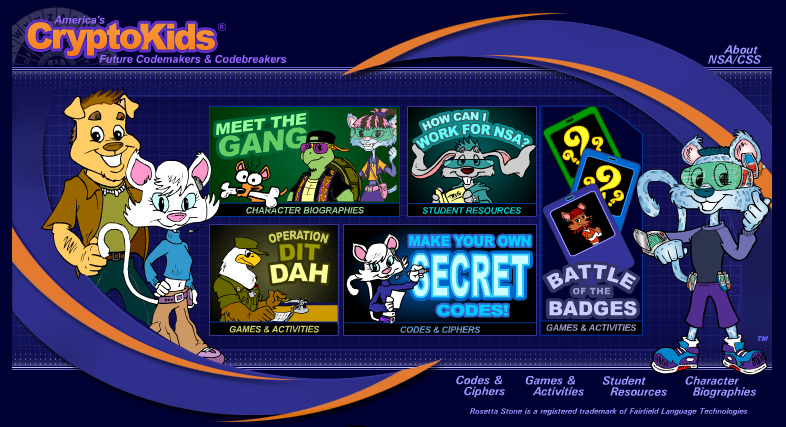 Some civil libertarians view the website as propaganda. Experts in early childhood development and marketing say the tactics are comparable to McDonald’s marketing with toys in Happy Meals.

Children are told on the website, “As a signals analyst, you will work with cutting edge technology to recover, understand and derive intelligence from a variety of foreign signals found around the world. You will also attempt to identify the purpose, content, and user of these signals to provide critical intelligence to our nation’s leaders,” reports The New York Times.

According to Nina Huntemann, a professor at Suffolk University who studies the social impact of new media, the type of marketing educators use to send messages to children with cartoons and games has proven “to be ineffective at actually connecting with people.”

Per President Bill Clinton’s policy memo that called for federal agencies to develop ways to educate children about the government, agencies including the CIA and FBI have developed websites and video games to spark children’s interest.

The CryptoKids site also urges children to stay safe on the Internet, and to be careful when sharing private information.