Performance tracking wireless earphones, The Dash, have become one of the most funded Kickstarter projects in history. The company had a target of $260,000, but has so far raised over $3.1 million. The wireless stereo earphones play music via an embedded music player or Bluetooth and offer fitness monitoring. It will track users’ vital signs including heart rate, oxygen saturation and energy spent, as well as movement such as number of steps, speed and distance. 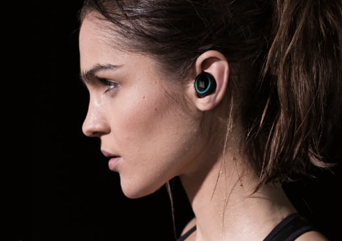 The earphones can function without being connected to a smartphone, and double as a Bluetooth headset. The Dash are also noise isolating and waterproof. This technology is made possible with, “a tiny ARM processor, three-axis accelerometer, analog-to-digital converter, digital signal processor, battery, thermometer, and ear-bone vibration speaker-microphone” reports Wired.

The Dash was created by Nikolaj Hviid, who was previously head of design at the audio company Harman. He created the company, Bragi LLC, to develop The Dash, and collaborated with Josef Schneider, former head of design from AKG; software developer Toby Martin; and designer Arne Loermann.

Hviid came up with the idea to create The Dash after he tried to go for a run and experienced pain in his lungs and knees after a kilometer. After his athletic friend gave him tips on running and breathing techniques, he was able to run five kilometers without any issues.

Hviid set out to combine performance advice with high-end audio. “I wanted to take all of the stuff away — the phone, the watch — and make something as pure as possible,” he said. “Just two ear plugs to entertain me, listen to me and take care of me.”

For more information, visit the Bragi site or The Dash Kickstarter page.